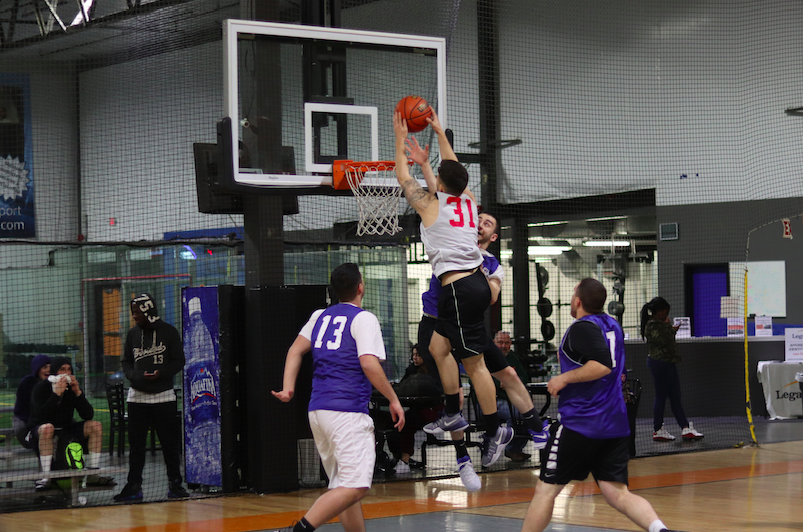 In what was a closer than expected first half of basketball a Matt Marconi-less Goon Squad squeaks away with a narrow eight-point victory over Shooters Shoot, 71-63. After being outscored by nine points in the first quarter and ultimately trailing by 4 to end the half, Goon Squad needed an answer.

That answer came in the form of one of their standout performers Dom Migliaro. Migliaro finished with an impressive 29 points in an outstanding shooting performance. Migliaro buried shots from all over the floor shooting an efficient 62.5 percent on field goals and 54.5 percent from beyond the arch.

Goon Squad snagged their fourth win, securing them the nine-seed in the upcoming playoffs. Shooters Shoot now knows they will be the no. 13-seed with the loss, as they are now unable to catch any teams in front of them in the standings.

The bulk of Goon Squads scoring came from four guys; Migliaro, Chris Folsom, Scott Corchard, and DJ Ellis. All four guys finished in double-digits. Free-throw attempts are the tale of this game however, as Goon Squad took 11 more than Shooters Shoot. They converted on eight more free-throws which was the deciding factor.

Luke Riccio of Shooters Shoot had another big performance in an effort to will his team to their second victory of the season. Unfortunately, Riccio’s 22 points, nine rebounds, eight assists and seven steals were not enough to get the win. Steven Parravano also showed some grit posting a double-double of 18 points and 10 rebounds.

The Goon Squad’s Derrick Edwards credits the entire team for the win, and is looking forward to their playoff matchup next week.

“(We had) good team chemistry as always, and some good hustle plays by Folsom,” Edwards said. “We just have to be ready for the playoffs.”