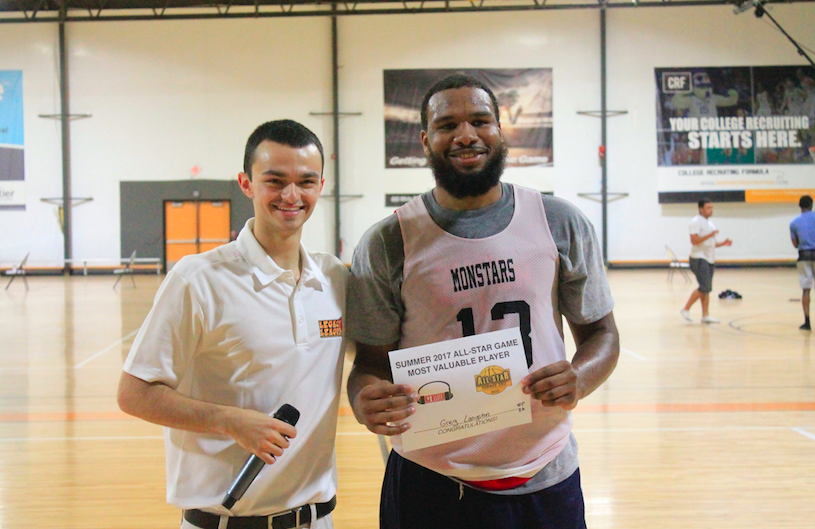 All-Star captain Mike Bozzuto stepped up to the podium at the beginning of the month, and took the Monstars Greg Langston with his first pick of the All-Star draft.

Playing against the league’s best, Langston exploded for 40 points and dished out 11 assists to guide Team Bozzuto to a flashy 159-154 victory over Team Singleton.

Langston made 14 of his 18 shots from the floor while shooting 9-for-12 from the three-point line. He worked especially well with fellow Monstars teammate Reggie Stewart, who found Langston on the receiving end of many of his 12 assists.

It was No Limit‘s Howie Miller who benefited from Langston’s court vision, slamming down a handful of alley-oops late in the game to help Team Bozzuto seal the victory. Miller was cold from beyond the arc, his usual bread and butter, so he decided to start crashing the rim and wait for Langston pass. It paid off.

It was actually Team Singleton in the driver’s seat for most of the second half, as the backcourt duo of Eric Singleton and Carmine Santorelli was humming on the offensive end, until Santorelli exited the game with an injury and did not return.

Santorelli left with 25 points on 11-of-16 shooting, which paced an effective night from the floor for Team Singleton, who shot 73 percent as a team. Stranger Danger‘s Melquan Horton had himself a night for Team Singleton, finishing with 26 points, a game-high 13 assists and nine rebounds.

Team Bozzuto was expected to put on a three-point display given their roster, and they didn’t disappoint as they threw up 63 three-point attempts compared to Team Singleton’s 17. It was Langston who had the hottest hand from deep, and he will look to carry it over into Tuesday night’s Championship Game against No Limit at 9 p.m.