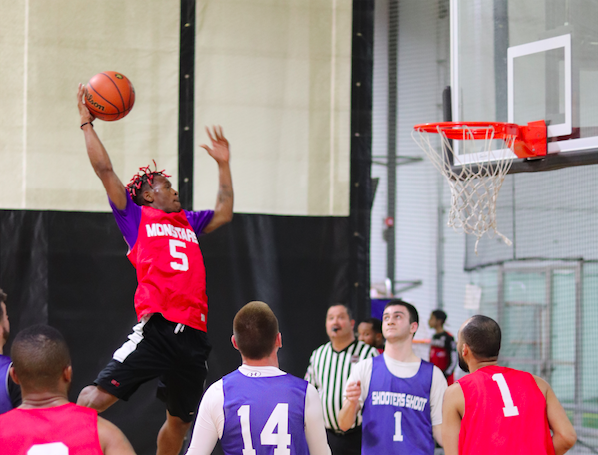 Shooters Shoot (0-5) had a gameplan coming into the game: shoot threes and try to get out in front. They found themselves leading after the first quarter, but not with 3-point shooting and instead with physicality in the paint.

They kept it close throughout the first half, but the defending back-to-back Legacy Leagues champion Monstars (4-1) were just too much Monday, as they defeated Shooters Shoot, 72-64.

The Monstars started out slow, but their team leader and Summer 17 Finals MVP Reggie Stewart took over the offense and finished with a double-double with 18 points and 10 rebounds.

“We had to start actually playing,” Stewart said. “We had to come out stronger in the second half and the second quarter and had to pick up our defense.”

Shooting 49 percent from the floor as a team, they outshot Shooters Shoot to mount their comeback in the second half. Corey Jacobs and Chris Rosario had 13 and 12 points, respectively, to compliment Stewart in his efforts. The full-court press that was put on at the beginning of the second half slowed down any momentum Shooters Shoot had. The Monstars look like they’re clicking on all cylinders at the right time and the team chemistry is growing.

“Better by the week,” Stewart said.

Shooters Shoot played a hard-fought game, outrebounding the Monstars 39-33, but couldn’t keep up with the speed of their opponent. Four players finished in double-figures in points, but Kris DiCocco had a double-double with 14 points and 10 rebounds, and Brandon Guittard was the leading scorer with 18 points and five rebounds.

Shooters Shoot take on Blood, Sweat, & Beers (0-4) next week, looking for their first win of the season, and the Monstars get a matchup next Monday against undefeated No Limit (5-0).