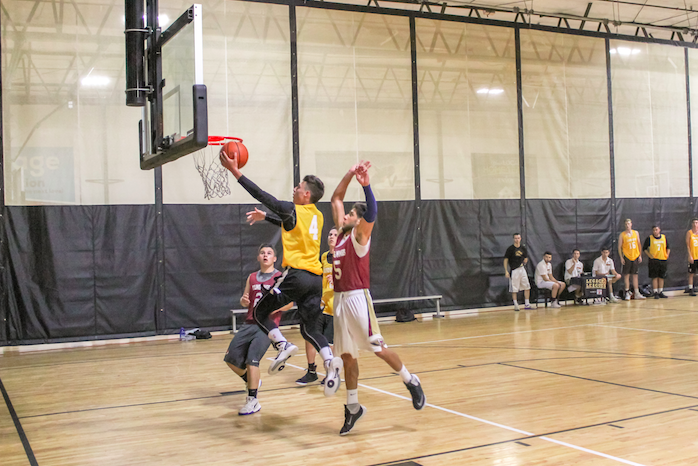 In a matchup with no clear favorite to win, J’s Treys & Fadeaways came out on top, 70-62 against the Young Kings in Week 5. A tight game through all four quarters came down to the very last minute where Joe Nemchek was able to knock in two clutch free-throws to put the J’s up by five points.

The Young Kings never recovered from the deficit, and ultimately lost by eight. However, as always, Myles Raymond played an outstanding game. Even though he shot a rough 39 percent from the field, he finished with 27 points and 11 boards. Eddie Whitman added his own 20-point performance including six three-pointers.

“They only had four guys, so we were just trying to run the whole game, and it kind of worked at the end because they kind of got tired,” Eddie Giovannini said.

J’s Treys & Fadeaways’ game plan worked out perfectly. A fatigued Young Kings team weren’t able to keep up when it counted. J’s had eight players Monday, and all but one player scored. A true team effort was the story in this game. Both Joe Nemchek and Eddie Giovannini scored 24 points. Steven Parravano finished with a near double-double grabbing ten rebounds to go along with his eight points.

“We’re a new team, so we’re still trying to figure out how to play with each other and every game we’re just trying to get a little bit better to get ready for the postseason,” Goivannini said.

After Monday nights game, J’s Treys & Fadeaways should feel more confident about their chemistry. Their communication on both sides of the ball definitely assisted them in the victory, especially in the fourth quarter. As a team, they shot 50 percent from the field.

If they can keep up this teamwork effort and continue to execute their game plan, they should have no problem capturing more wins this season.

As for Young Kings, their shallow roster won’t do them any good in the long run, but as long as they leave it all on the floor as they did Monday night, they can still compete with some of the top teams in the league.