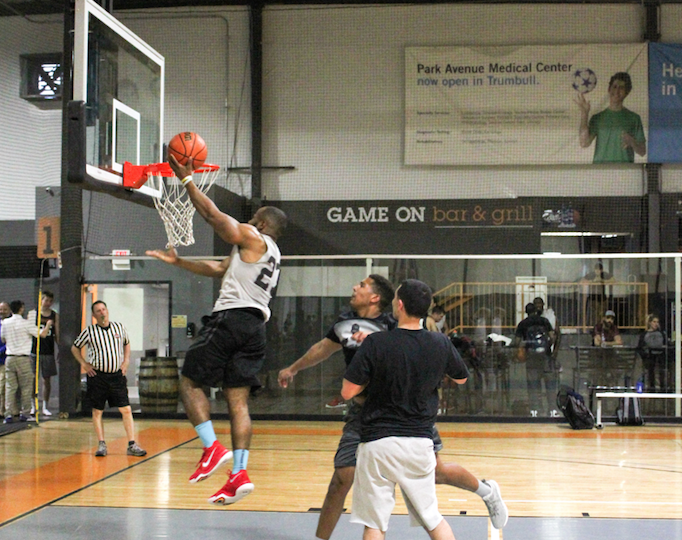 NickStrong faced off against the Head Hunchos Monday night in their Summer 18 season debut, winning 76-67. Even though it was a strong all-around performance, the game ball belonged to Michael Vessicchio, who finished with a Legacy Leagues’ night-high of 38 points to go along with nine boards.

Vessicchio not only played lights out offensively, but was solid on the defensive end as well. NickStrong held the Head Honchos to only 21 first-half points and caused 10 turnovers all while forcing them to shoot only 39 percent from the field. Head Hunchos’ Brett Cody was one of two players on his team with at least 10 points, finishing with 33 points and 12 rebounds. Despite Cody’s double-double NickStrong came away with the victory.

“We got to keep the momentum going the whole game, tried to keep the energy up even though we’re a bunch of old washed up athletes,” Vessicchio said.

Ironically, NickStrong’s 76 points were the second-most scored Monday night out of all of the games played, which is pretty good scoring and pace for “a bunch of old washed up athletes.” Their age meant absolutely nothing, but experience was key. Vessicchio and his teammates played with poise and never got to comfortable with their lead. In fact, they never trailed and were only outscored in one quarter.

“It’s our first time in the league so we want to just be hot, continue the hot streak, and keep going,” Vessicchio said.

If the team can play like it did on Monday or at least anything close to it, they shouldn’t have a problem staying hot. After a blowout win in their scrimmage game last week against the Young Kings, along with tonight’s nine-point victory, NickStrong hopes to keep their momentum alive and strong when they face a rolling Team Moose next Monday. The Head Hocnhos will play Above the Rim in Week 2.