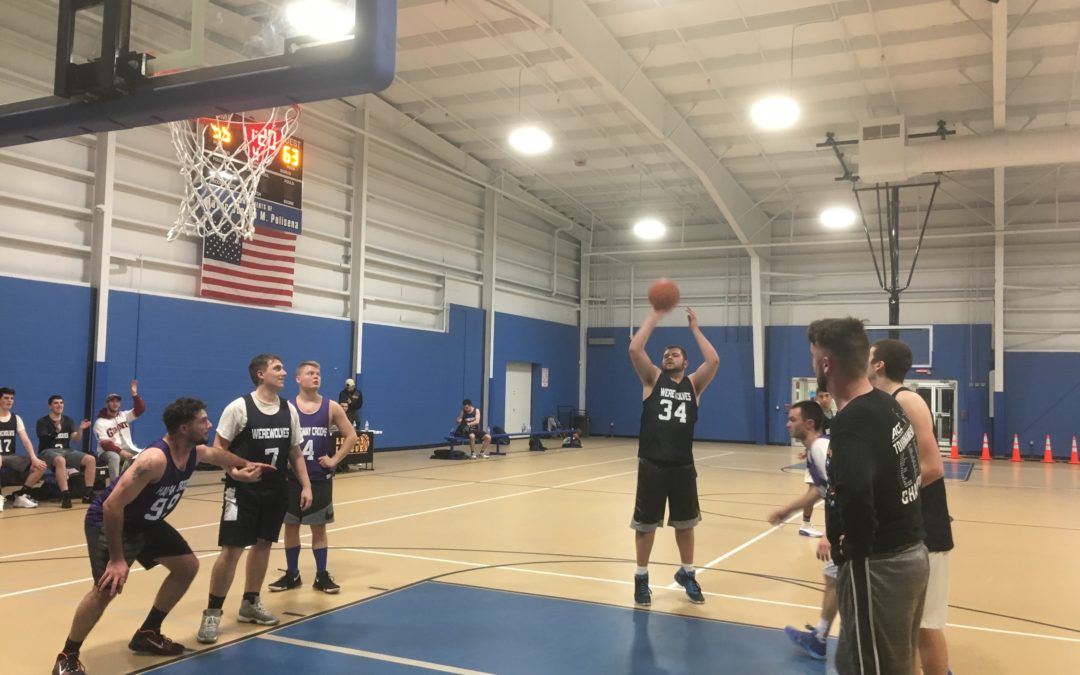 If you saw Brad Allen walking down the street, the words “basketball player” probably wouldn’t pop into your head. Allen stands at 6-foot-2 and is a little stocky, and he may be one of the quietest stars in The Legacy Leagues. I went through the entire season without knowing what his voice sounded like, really.

These last two seasons were Allen’s first exposure to organized basketball since he played in high school. It all started before the Fall 2017 season, when Werewolves captains Gino Forte and Brian Heston were looking for a big man for their squad. The two had played with Allen in high school, and Allen was close friends with Heston’s older brother.

“We needed a big guy, and none of our friends are really that big,” Forte said. “We figured he’d be a sleeper because he has moves people wouldn’t expect out of him.”

In that first season, Allen averaged 7.8 points per game and 8.7 rebounds per game, numbers that no one would scoff at, however nothing eye-popping. He started off the Winter 2018 session slowly, with six points total in the first two weeks. The Werewolves offense was carried mainly by Forte and Heston, the two all-stars on the team.

Heading into the middle of the season, the Werewolves sat in the center of the standings ahead of the bottom dwellers, but not quite a top-tier team. Both Heston and Forte agreed that the team desperately needed an inside presence when the perimeter shots weren’t falling.

It was Week 4 when Brad Allen started to solidify himself as a player to watch. In the final seconds, the Werewolves were tied at 59 against the Wild Hogs. Gino Forte’s floater missed everything, and Allen scooped up the rebound and sunk the putback as the final buzzer rang, winning the game for the Werewolves.

“Gino had been losing a little confidence in his shot, but the entire game I told him, ‘Keep shooting, I got you. I’m in the paint, I’ll get the rebound.'” Allen said. “I wanted him to trust that I would get on the offensive glass when we needed it. I knew the clock was low on time and I knew the shot was going up so I just tried to position myself the best I could and box out my man. I tracked the ball and put it back up. I didn’t really overthink it too much.”

While many people may have saw this game as the initial coming-out party for Allen, Heston believes it was the previous game that gave his teammate the edge.

“The week before he had a great game,” Heston said, referring to Allen’s 15 point, 15 rebound outing versus the Average Joes. “I felt like that gave him some confidence in himself and really helped him dominate the second half of the season.”

And dominate he did. Perhaps Brad’s biggest test came two weeks later when the Werewolves took on Prestige Worldwide and All-Star big man Shaine Patrick. Prior to the game, Forte had told The Low Post Podcast that Allen was going to lock Patrick down and control the paint for the Werewolves. The Werewolves then took to Twitter to back their statement, and put Allen in the league’s spotlight that week.

“They were doing all this trash talk with Shaine, sending me screenshots trying to pump me up,” Allen said. “As soon as he said that I knew I was gonna have to work hard as possible to prove him right. I can’t make my teammates liars for believing in me, even though I’m not huge on trash talk. Keeping Shaine from being a force in the paint was a lot of work, but it just made it more fun.”

Allen held Patrick to only two points on the night. Patrick finished the season scoring 12.3 per game. While that particular matchup ended in his favor, Allen had nothing positive to say about that game.

“No matter how me and Shaine’s matchup went we still lost the game,” Allen said. “Bryan Yarce absolutely torched us and it’s because, as a whole, the team focused on one matchup instead of the game.”

While Allen’s production was extremely important to the Werewolves, it didn’t lead to any improvements in the win column. Allen’s numbers were there, however there were other holes in their game that the Werewolves became aware of.

“It felt like we were missing an inside force,” Heston said. “Then once Brad got his mojo it felt like there were other parts of our team that weren’t clicking. That’s more of the reason we couldn’t put together as many wins.”

Allen finished the year with the third-best field goal percentage in the league (64.4 percent). He was fifth in total rebounds (67), and third in blocks (19). As a result, he was awarded the Most Improved Player of the Winter 2018 season. Both Forte and Heston were aware of his abilities, they just weren’t sure if he’d showcase them like he did this past season.

“We knew his game was going to improve becuase he wasn’t dominating the way we knew he could,” Forte said. “We knew it would happen, but never thought as consistently as it did. We thought he’d have his games here and there.”

Heston himself said he didn’t see it coming, but that Allen became the player they’d imagined all along.

Allen says he is happy with the award, but a competitor never stops, and he still sees room for improvement.

“It’s always great to get recognized for your hard work,” Allen said. “No matter how good I get, I always want to get better. With the talent in this league, I think everyone on our team will need to step it up. If we don’t work harder every night, we can’t break into the top of the league.”