No Harrison, no chance: top-seeded Brotherhood steamrolls into Finals 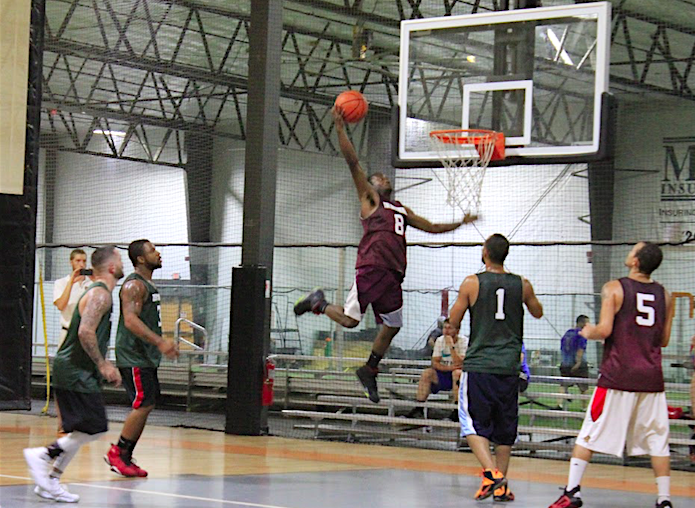 ZewCrew gave the Brotherhood its closest call during the regular season with a 68-55 loss in Week 8. On Thirsday night, the Legacy Leagues’ behemoth stomped out any chance ZewCrew had at making a title run.

The top-seeded Brotherhood continued its undefeated reign in the Legacy Leagues with a 132-47 win over No. 5 ZewCrew in the first of two league semifinals.

“I feel very proud of my team,” the Brotherhood’s Russ Payton, a Legacy Leagues’ All-Second Team selection, said. “We’ve worked hard all year. We play unselfish. Everybody plays for each other.”

As if facing the Brotherhood wasn’t difficult enough, ZewCrew was forced to take to the court without two of its top players: Mark Harrison and Chris Rosario. It was up to Ty Alston, James Davis, Justin Silva, David Woolfork and Giancarlo Zipper to upend the Brotherhood and advance to the championship game.

“Every game, we come in with the same mentality,” Payton said. “We’re going to press teams for the whole game, no matter what the score is. “Run it up; that’s our team slogan.”

The Brotherhood outscored ZewCrew 32-9 in the second quarter to take a 29-point lead into halftime before further asserting its dominance over an increasingly tired underdog in the second half.

The Brotherhood won the third quarter 33-7 before easing on the gas pedal in a 44-14 fourth quarter.

Michael Davis, the league MVP, proved his worthiness in the fourth quarter, raining 3-pointers worse than the thunderstorms that struck the state Thursday night. Davis finished the game with 31 points on 11-for-12 shooting, including a stretch where the entire Insports complex watched in awe as Davis continued to test his hot hand.

With the loss, ZewCrew ends its season with a combined 6-5 record between the regular and post season. Silva led the team in scoring on Thursday with 15 points. Alston finished with 12 points, 7 rebounds and 7 assists while both James Davis and Woolfork scored nine points.

With a chance to create history in the opening Legacy Leagues season, the Brotherhood holds firm that it has the league in its grasp.

“Next week, we about to close it out, win the ‘ship,” Payton said.