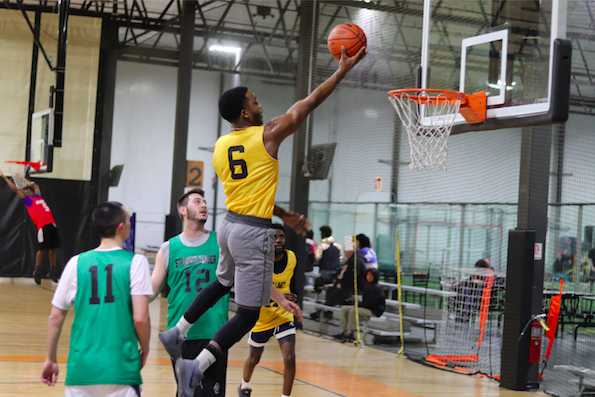 No Limit put on a show Monday night, earning their fifth win of the season. They have yet to be stopped, rolling to a 124-75 win against a struggling Stranger Danger squad.

For No Limit, four players—Howie Miller, Shaquan Jackson, Ronte Byrd and Eric Singleton—all put up 20 points or more in their dominating victory. Also, Rashawn Hendricks made a notable impact in his first game of the season, grabbing nine boards, dishing out 10 assists and causing four turnovers.

If it is not broke, don’t fix it. This has been No Limit’s mentality since the start of Week 1.

“When we press, we’re hard to beat since we get out and run, especially with Rahsawn back,” said No Limit’s Will Hudson.

No Limit kept their foot on the pedal throughout the whole game, creating 14 steals with their daunting full-court press.

For Stranger Danger, Matt Zocco and Joey Zocco combined for 48 points, while Tyler Feldman reached a career-high in points with 10 and snagged 12 rebounds to complete his double-double. Unfortunately, down the stretch Stranger Danger failed to make enough stops on defense, leading to No Limit’s 124-point game.

In Week 6, Stranger Danger will tip off against a rolling Flint Tropics squad who have won their last four contests, while No Limit will look to stay undefeated against a talented Monstars squad.

“Faster defense get us more points,” Hendricks said. “And that’s exactly what we’ll look to bring next week.”