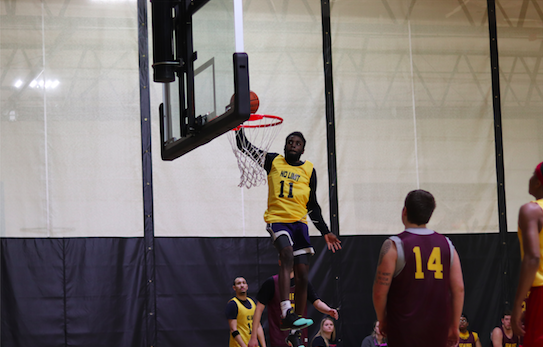 The outcome of the game was never in doubt when No Limit took the court with Semi Pro Monday night, as a convincing 105-52 victory improved No Limit to 2-0 on the season.

The game featured multiple highlights from No Limit, who put up at least 20 points in all four quarters. No Limit shot 55 percent from the field as a team and were unselfish with the ball with 30 assists. Their leading scorers were Eric Singleton, the Summer 17 Offensive Player of the Year and Most Improved Player, and Howie Miller, a three-time All-Star. The duo scored 32 points and 29 points, respectively, leading the charge toward a blowout victory.

“[The keys were] defense and making them turn it over a lot,” Singleton said. “We’re way faster than them.”

Semi Pro scored more points than last week, but as Singleton mentioned, they couldn’t keep up with No Limit’s speed. RJ Woodson and Keith Murphy were the bright spots with 13 and 11 points, respectively. The turnovers continue to be a focal point for Semi Pro, as they turned the basketball over 17 times in the contest. Fouling was also an issue with 13, giving No Limit 22 chances at the stripe. They’ll look to get into the win column next Monday against Temptations (1-1).

As for No Limit, they’ll look to keep the good times going with a matchup against Shooters Shoot (0-1) next Monday.

“Whoever we play for the rest of ever, don’t show up to the game, because it’s over,” Singleton said.