No Limit, No Losses: Vargas and Co. Hold Off Goon Squad 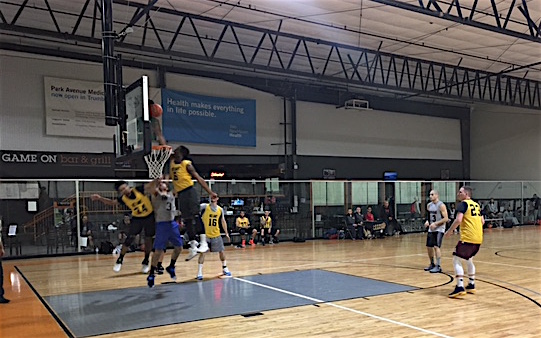 With playoff implications on the line, Tuesday night of week nine in the Legacy Leagues was filled with drama. In a highly anticipated matchup, undefeated No Limit was able to hang on late despite Goon Squad‘s best efforts, 83-77.

Defense is going to be extremely important for No Limit come playoff time. They took their foot of the gas pedal in the second half, and let up defensively which allowed Goon Squad to claw their way back into the game.

Thanks to strong inside play from standout Tarrell Vargas, No Limit was able to get away with their lackluster effort late in the game. Vargas posted a double-double on the night, scoring 28 points and grabbing 14 boards. He got it done on the defensive end as well, adding three blocks.

For Goon Squad, despite the loss they should come away feeling very good about their chances in the playoffs. Without Matt Marconi, they were still able to take one of the top two teams in the league down to the wire thanks to strong performances from Brandon Massaro, DJ Ellis, and Justin Green. Massaro led the way scoring 25 points to go along six rebounds, while Ellis and Green both added 16 and 17, respectively.

No Limit also saw strong play on the offensive side of the ball from Howie Miller and John Rullan, who scored 23 and 20 a piece. After the game I asked them what they need to do to stay hot in the playoffs and Rullan said, “Well first we have to get by temptations.” I followed up by asking how they plan to do that and Rullan kept it short and sweet, telling me, “Defense.”