No Limit pulls away late, continues undefeated run with win against Goon Squad 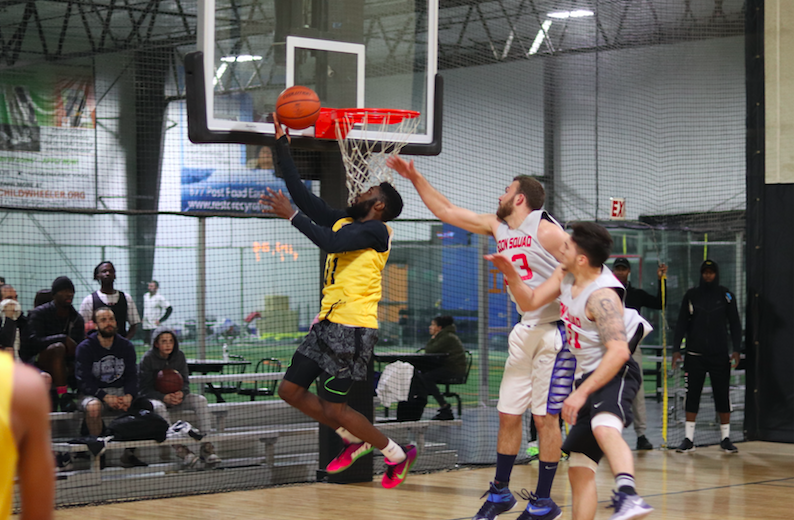 In what looked like a potential upset up until the final two minutes of the game, No. 1 No Limit took care of business and advanced to the semifinals of the Winter 18 season with a 57-51 win against the No. 9 Goon Squad.

“That was a really tough game for us. We played a bad game, they played a great game,” No Limit’s Eric Singleton said. They’re a good team, we just pulled it out.”

The matchup was closer than what the playoff seeding indicated. No Limit didn’t grab their first lead until a minute into the third quarter. Goon Squad was up by as many as six points at one point in the first half.

No Limit’s leadership and poise as a unit kept them in the game and ultimately the victory with key made baskets from beyond the arc and critical turnovers down the stretch.

“It’s hard to keep your composure when you got Ronte yelling at us,” Singleton said. “We just got to know to stay calm, we’re good. We’re undefeated for a reason, we just have to remember that.”

No Limit spread the wealth with Tarell Vargas leading the way with 14 points and six rebounds. Shaquan Jackson scored 13 points with four rebounds and Eric Singleton had 12 points with six rebounds. Forcing Goon Squad to turnover the ball over 14 times was the difference maker in the outcome on Tuesday night, as No Limit go their 10th win of the winter.

Goon Squad upset the defending back-to-back champion Monstars on Monday, but they couldn’t find that cinderella magic tonight. Their season ends in a game that you would never think they were the underdog in. Scott Corchard kept Goon Squad in the game with clutch shots at the end and he finished with 18 points and four rebounds. Dom Migliaro and Chris Folsom had 12 and eight points respectively.

No Limit continues their championship drive with a matchup against the No. 5 Temptations next week in the Semifinals.

“We’ll see you in the finals,” Singleton said.