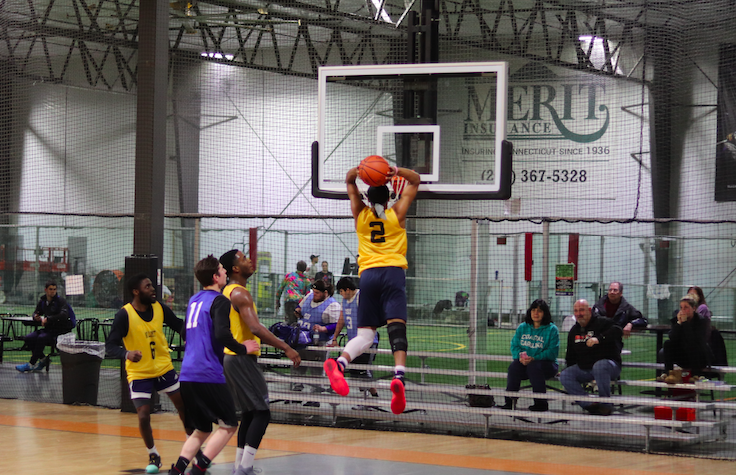 No Limit kept their perfect season alive with a 96-58 win against Shooters Shoot, one of three teams that are still winless this season.

Shooters Shoot would only held two leads in the game, a 1-0 lead, after starting the game off with a technical foul, and a 8-5 lead a few minutes into the first quarter. Going into the second quarter, No Limit would find themselves up only by three, however, and it would be their dominating defense that would shut down Shooters Shoot for the rest of the game.

No Limit’s ability to create turnovers not only frustrated the Shooters Shoot offense, but also allowed their own offense to get points from their defense.

“We were a little bit faster then, so once we got our hands on the ball we were out,” No Limit’s Will Hudson said.

As a team, their defense gave up 58 points, allowing only nine in the second quarter.  They would also have 39 total rebounds, six blocks, and 13 steals.

Most of the Shooters Shoot turnovers came when No Limit had them in a full-court press.

“It was a pretty close game at halftime, but that’s what we have to do, get out and run,” Hudson said.

No Limit’s unselfish offense would stay hot for the third game in a row, now averging 98 points per game. They had 21 assists, Shaquon Jackson and Howie Miller each having five.

Tarell Vargas led all scorers with 20 points. Ronte Byrd and Eric Singleton combined for 37 points. Jackson had 17 points, shooting 88.9 percent from the field.

Every player, from both teams, scored in the game. Alex DeMeis was the only player from Shooters Shoot to post double-digit points with 10.

No Limit looks to continue their undeafeated season against a similar team in the winless Blood, Sweat & Beers next week.

“I’ve never beat them in my whole Legacy Leagues— career,” Hudson said. “Let them know I’m coming for them.”