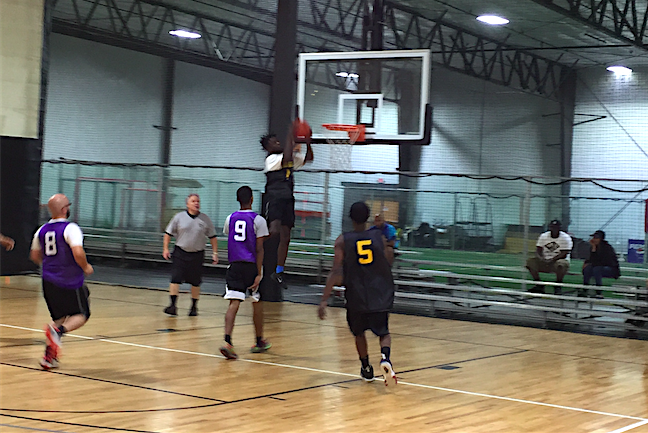 Newcomers beware, the Cereal Killers are here to play. They defeated the Air Ballers, 87-29, on Tuesday night.

The straight jacket was on tight, as the Air Ballers only mustered double-digit points in the fourth quarter. The Cereal Killers were able to force 26 turnovers, with Dana Smith and Zach Gaffney picking up four steals a piece.

The offense also came to play as the Cereal Killers got 26 points from former Brotherhood member and All-Star team Captain Tyrhon Coward.

“Our chemistry was good tonight,” Coward said. “We are just looking forward to playing all the other teams. We got a lot of room for improvement, but there is a lot in store for us.”

Not far behind was Will Hudson who dropped 24 points of his own to go along with 12 boards. The Cereal Killers were able to consistently beat the Air Ballers down the court for repeated fast breaks.

The Cereal Killers definitely have room for improvement, despite their big win, as they shot just 5-for-20 from three-point-land.

Jaylon Smalls was the only player for the Air Ballers to eclipse the double-digits, with 13 points and 12 rebounds. They know which area to target for improvement, as they shot just 21percent from the field, including 1-for-21 from three.

They compounded this poor shooting effort with 26 turnovers, a league-high this week. They either have to improve ball security or shot selection if they want to compete going forward.

The Cereal Killers (1-0) square off in a Rocky vs. Apollo-esque dogfight against The Temptations (1-0) next Tuesday at 8pm. The Air Ballers (0-1) face off against Blood, Sweat, and Beers (1-0) next week at 10pm. BS&B knocked off the newcomer Kekambas by five this week.