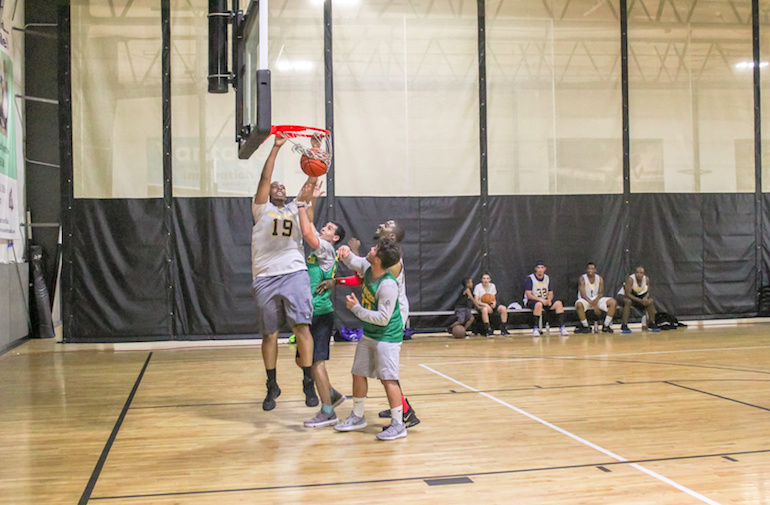 Shocker City was not having any trouble putting the ball in the basket, as they lit up the scoreboard in a 123-79 victory over the Head Hunchos in Week 5.

The undefeated group brought their A-game to Trumbull this week as they made their presence felt against the Head Hunchos. It seemed as if they were just playing around at some points because of how easy they made scoring look. It was the third time this season that Shocker City has scored over 100 points.

Shocker City is firing on all cylinders right now as they are 5-0 heading into Week 6. The usual suspects once again came through for Shocker City, leading them to yet another victory. Davon Pratt was a catalyst scoring 28 points while shooting 6-of-12 from behind the arc.

Two 1000-point scorers in the Legacy League added to their career totals in this one, as Carmine Santorelli scored 16 points, while Mike Davis had 20. The team was only taking high percentage looks as good ball movement set up open jumpers. Shocker City shot 44 percent from downtown, and 58 percect from the field.

“We just did the same stuff we always do,” Santorelli said. “We were sharing the ball well. They say we don’t pass to each other. They say we have too many players and were selfish, but we must be like number one or two in assists.”

For the Head Hunchos, they continue the trend of teams falling to Shocker City. Brett Cody continues his magnificent year as he scored 22 points shooting 59 percent from the field, while grabbing seven rebounds.

The Head Hunchos were clearly overmatched in many areas of the game, especially the high pace. Once Shocker City started to pick up the tempo on offense and pressure the defense, things starting to fall apart for the Head Hunchos.

After having two tough matchup in a row, the Head Hunchos (2-3) look to get back on the right track when they take on the Young Kings (1-4) in Week 6.

As for Shocker City, they will take on the only other undefeated squad, Team Moose (5-0), next week. Team Moose has been playing very tough defense so far this season, so Shocker City will have to keep sharing the ball well if they want to come out with a big victory.