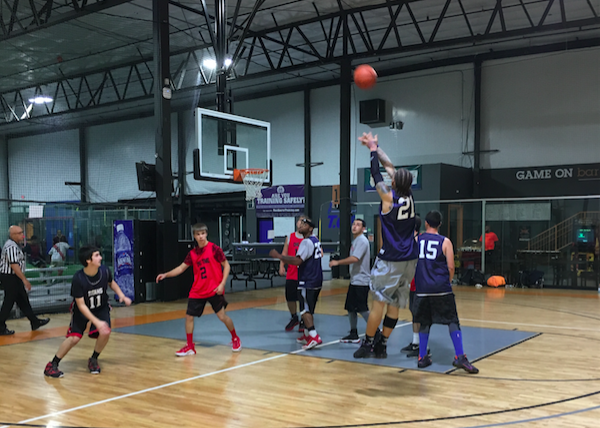 In a game that pitted winless squads One Time and Titans against each, we wouldn’t expect a lot of fireworks, but instead we really got our money’s worth Tuesday night. The Titans’ James Echols made the play of the game for his squad, stealing a One Time pass and slamming it home with under a minute left to give the Titans the late lead, capping a great comeback and their first victory, 58-50.

“It feels great” the Titans’ Chris Rudzinski said. “We grinded hard as a team, played good defense, and we came back right at the end.”

It was a back and forth affair all night with One Time finding a foothold in the fourth quarter, holding a two-point lead between them and a surging Titans squad. Mike Cody was the “Atlas” for his One Time team, as he carried them with 33 of his team’s 50 points, while adding nine rebounds and four steals while consistently drawing fouls and aggravating the competition.

But it was to no avail, as the Titans, powered by a 25-point fourth quarter and many successful trips to the free throw stripe, found their way to the promised land and put the first notch in the win column. Ty Drish led his squad with 12 points, as Greg Horne added nine huge points, going 3 -of-5 from beyond the arch late in this game.

After looking strong these past two weeks, the Titans will look to make it two in a row, as they face a weak Air Ballers team next week. One Time will have another chance at finding the win column next week against Goon Squad, but if they don’t find a second option to compliment Mike Cody, this team should settle in for a long stay at the bottom of the standings.