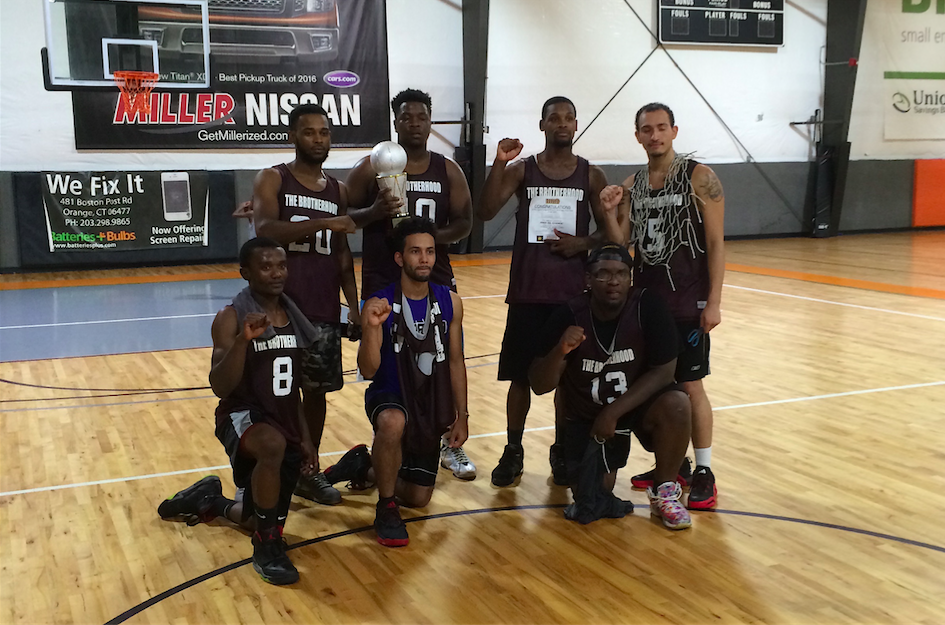 The Brotherhood led at halftime in every game they played heading into the championship against Sportslook. In fact, their average halftime lead was an astonishing 22.5 points through 11 games.

That streak came to an end Tuesday night when the top-seeded Brotherhood trailed Sportslook, 44-42, at halftime of the Summer 2016 Championship Game. The Brotherhood, playing without Russell Payton, struggled to get into their vintage high-scoring offensive rhythm in the first half.

However, a 31-15 third quarter run by the Brotherhood put the game out of reach, as they would go on to win the final game to complete their perfect season, 93-75, in The Legacy Leagues inaugural season.

The Brotherhood knew they would be without Payton, who averaged 22.1 PPG, 6.2 RPG and 2.9 APG. Certain players would therefore have to step up to ensure victory despite the team’s dominant performances throughout the season, especially since they had not faced both Andrew Cavanagh and Bryan Acevedo at the same time.

Michael Davis and Kevin Rivera stepped up and filled the void. Davis’s 39 points, six rebounds and two assists  earned him the Finals Most Valuable Player award. Davis assuming a larger role in the absence of Payton was no surprise, especially since he was previously named Legacy Leagues Most Valuable Player and Defensive Player of the Year during the regular season.

“Michael Davis is one hell of a player honestly,” The Brotherhood’s Jibril Chisholm said after the game. “He’s a great facilitator, he can score, he can throw assists, he can play defense and he just does a lot on the court.”

But for Rivera, who averaged just 7.3 PPG and 2.9 RPG, there was no predicting the decisive role he would play. In the second quarter, Rivera took a large blow to the head after colliding with Sportslook’s Cavanagh. Although he wobbled to the bench very upset, the physical and mental perseverance that ensued helped The Brotherhood claim their championship. Rivera’s 18 points, which included several eyebrow-raising dunks, served as a morale boost for the team in the second half.

“That’s what gave us that momentum,” Chisholm said.

Sportslook gave it everything they had, as they found more success against The Brotherhood than any other team had found all season. Although he probably would not admit it publicly, Steve Christy’s coaching was so brilliant that Gregg Popovich would have smiled.

Nick Bacarella took the impossible task of guarding Michael Davis, just like he did to BS&B’s John Lutters in the semifinals. Even though Davis finished with 39 points, Bacarella’s tight defense was a main reason Sportslook was in the game for as long as they were, until Davis went off in the second half.

Sportslook also protected the ball better than any other team had against The Brotherhood, who averaged 18.1 steals per game. Coach Christy’s press-breaking strategy held The Brotherhood to a single-digit steal total for the first time.

Everyone knew going into the game that Acevedo and Cavanagh would need to have monster games to keep pace with a high-scoring Brotherhood team. Their combined 43 points on 38.9 percent shooting fell short of what Sportslook needed to pull off the upset and to hand The Brotherhood their first loss.