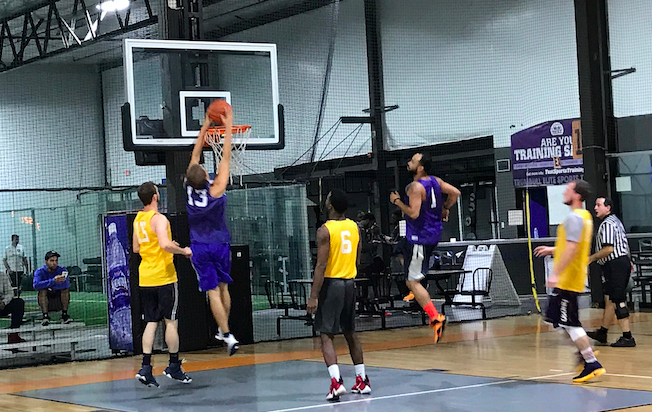 Despite three of four analysts picking against them, Run TMC proved the previous two weeks were not a fluke. They shocked No Limit in a seesaw battle with countless lead changes that ended in a 77-67 upset.

No Limit came into the game leading the league in three-pointers attempted, made, and three-point percentage. They shot a putrid 4-for-37 from deep Tuesday night, in the worst shooting performance of the Legacy Leagues season thus far.

John Rullan came into the game shooting 27-for-69, hovering near 40-percent on the season. Poor shot selection coupled with his inability to get into a rhythm and some tough no-calls resulted in an astounding 0-for-11 performance from beyond-the-arc by Rullan on Tuesday night.

Despite visible struggles, Tarell Vargas finished with 30 points and ten boards. Accumulating such a stat line on an off-night shows how dominant Vargas is capable of being, especially as we approach the postseason. No Limit will look to capture their sixth victory of the season next week against the winless Air Ballers.

The first three-quarters were neck and neck, but Reggie Stewart’s stellar fourth quarter sealed the deal for Run TMC. He went 10-for-11 from the free throw line on his way to 23 points. This is a notable performance from the line in a league that shoots an average of 53.2-percent from the charity stripe.

Run TMC had four players score in double-digits, including 17 points from Shaq Holman and 14 from Matt Zocco. They will try to continue their three-game win streak next week against Cereal Killers. After opening the season 0-4, they have been reinvigorated with the guard Reggie Stewart in the lineup.

“We heard about the three-headed monster, so on defense, we trapped them,” Run TMC’s Reggie Stewart said. “Offensively, they couldn’t keep up with us in transition.”