Physicality and poise aid Nothing Easy in victory over Blue Devils 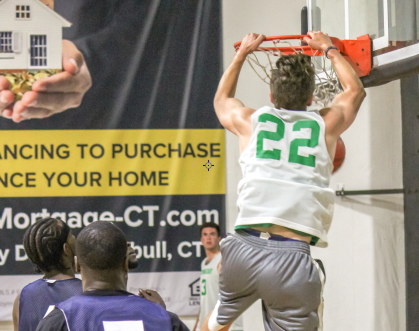 The Blue Devils kept the game close after the first quarter, but dug themselves into a hole defensively in the second quarter, giving into the physicality and poise of Nothing Easy.

“[Our game plan was] just to match their [aggression] and be just as physical as they were. They made us sweat a little in the end, but we came through with it,” Kevin Mokarry said.

Coming out of halftime, the Blue Devils went on a run and began to fuel their comeback from the defensive end of the floor allowing Nothing Easy to score only six points in the third quarter. The Blue Devils, attempting to regain their defensive prowess notched six steals in the contest, four coming at the quick hands of Steve Echols who also finished with 13 points.

Heading into the fourth, the Blue Devils defense began to tank once again allowing 19 points from Nothing Easy to end the game.

With five-of-seven players scoring in double digits for Nothing Easy, Summer 2017 All-Star Mike Slattery led the way notching a double-double heading into halftime. Slattery finished the contest with 24 points on 71.4 percent from the field and 11 rebounds.

Nothing Easy finished with five players scoring in double digits impressing with a 49.1 field goal percentage as a team, who isn’t known for their shooting.

“It’s just having confidence in our jumper,” Mokarry added. “If it’s gonna be there it’s just a matter of letting them go and watching them fall.

Leading the way for the Men in Blue was Matt Marconi, who added 18 points and four rebounds to his stat line while he was followed up by Echols and Prince Taylor with 11 points and three rebounds.

At an unexpected 0-2 record, the Blue Devils will take on The Throne in Week 3, who snuck past J’s, Treys, & Fadeaways on Monday night. While Nothing Easy will take on a very strong Run TMC squad who cooked Dinner’s Served falling just short of a 70-point victory.