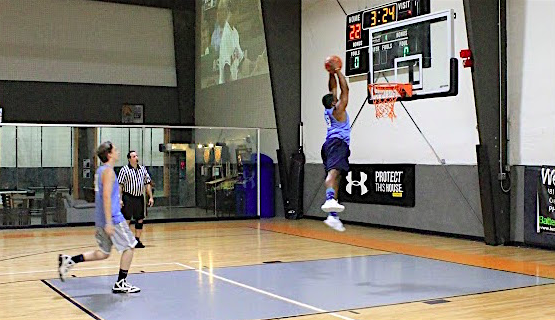 The No. 2-seeded Blood, Sweat and Beers will play in the quarterfinals of the Legacy Leagues 2016 Summer Playoffs Tuesday night at 10 p.m. They await the winner of #7 Run TMC vs #10 The Hateful 8 matchup.

BS&B came into the league unknown and underrated, just a group of close friends from West Haven, Connecticut. Hardly anyone thought they were legitimate contenders when they defeated The Land in Week 1 and then The Hateful 8 in Week 2. They lost to The Brotherhood the following week, and although they held them to their lowest point total of the season, most people wrote them off at 2-1.

It wasn’t until they started rattling off win after win that the league, analysts included, started turning their heads. They went on an impressive five-game winning streak after their loss to the eventual No. 1-seed, The Brotherhood.

BS&B had already clinched the No. 2-seed in the playoffs with their 7-1 record before facing off against ZewCrew in Week 9. While BS&B had nothing on the line, ZewCrew had important playoff seeding implications at stake. That proved to be the difference maker as ZewCrew took down BS&B, 58-54.

“We’re just looking forward to the playoffs,” BS&B’s Cody Dileonardo said after the loss. “We’ll put this one behind us and hopefully [we’ll have] better luck in the playoffs.”

BS&B won both games against their two potential quarterfinals opponents: Run TMC and The Hateful 8. In Week 2, The Hateful 8 fell at the hands of BS&B by 48 points. Three BS&B players finished in double figures: John Brolet with 17, Cam Tucker with 14 and Cody Dileonardo with 13. The Hateful 8 allowed 23 offensive rebounds in the loss.

BS&B didn’t beat Run TMC by 48 points, but their 16-point margin of victory felt much larger. It was BS&B’s first and only game having a 20-point scorer. In fact, they had two; both Cody Dileonardo and John Brolet finished with at least 20 points. Run TMC didn’t play particularly bad, but BS&B’s shooting was lights out. They shot an incredible 61.8 percent from the floor. Run TMC’s Will Hudson tried to bring his team back into the game behind his 42 points, but it was too little too late.

BS&B already has an advantage heading into the quarterfinals. It will be their opponent’s second game of the night, since Run TMC vs The Hateful 8 will take place just two hours before this matchup is set to tip off. BS&B normally likes to get out on the fast break, so if their opponent is too tired to keep up, BS&B can take advantage.

The main key to victory for BS&B is to keep playing team basketball since they don’t have one player that will carry the team. The only statistical category BS&B ranks in the top three in Legacy Leagues is in assists. They’ve won games all year playing true team basketball. Although they’ll be playing a tired opponent, this is the playoffs where anything can happen.

BS&B comes into the postseason with a 7-2 record, so they can be beaten. ZewCrew was able to win by playing physical down low, forcing BS&B to shoot from outside of the paint. It just happened to be that BS&B weren’t hitting their shots. If Run TMC advances, it will be up to Will Hudson and Kyle Murphy to play tough down low, and if The Hateful 8 beats Run TMC, the same responsibility will be in the hands of Steven Petrahai and Patrick Croteau. BS&B also ranks last in the league in 3-pointers made, so if Run TMC or The Hateful 8 can jump out to a commanding lead, BS&B will be forced to make shots that they don’t make a lot of.

Blood, Sweat and Beer’s unforeseen run in Legacy Leagues will be put to the test in the quarterfinals Tuesday night at 10 p.m.