Playoff Preview: No. 3 Sportslook vs No. 6 Wake and Blake 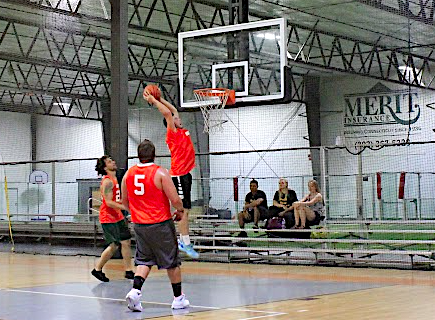 There is not much clarity of what to expect when looking at this matchup, because it is tough to predict just who will show up for either team when Wake and Blake and Sportslook face off Tuesday in the quarterfinals of the Summer 2016 Legacy League Playoffs.

After Wake & Blake lost Carmine Santorelli, they brought on Aaron Samuel (19.0 ppg) who helped them stay afloat as .500 team. However, after dropping 24 points, and eight rebounds the previous game against The Hateful 8, Samuel failed to show up for the last game of the season, which led to his team being upset by the second-worst team in the league, And-1.

So the real question is, who will show up? It is already known that Andrew Cavanagh will, after sitting out 7 weeks with an injury. Sportslook will look to be at full strength with both their top scorers, Bryan Acevedo (18.4), and Cavanagh (11.0) taking the court next Tuesday, which is a scary sight. Sportslook hopes to have both on the floor for the first time this season after getting blown out by the Brotherhood in their final game of the regular season. Sportslook only had Cavanagh, and not Acevedo, in their last game.

For weeks, Sportslook has been known as one of the best teams in the league, so it will be widely expected for them to earn a victory against Wake & Blake.

The psyche of Wake & Blake has to be in question after losing to And-1, and losing a chance to possibly earn as high as the No. 4-seed. They seemed like a team that did not know their identity without Samuel or Santorelli, and that could be a huge crutch going forward into the one game elimination playoffs.

The winner of Wake & Blake vs Sportslook game will face off against the winner of the Blood, Sweat and Beers vs Run TMC or The Hateful 8 on Thursday, August 8th.