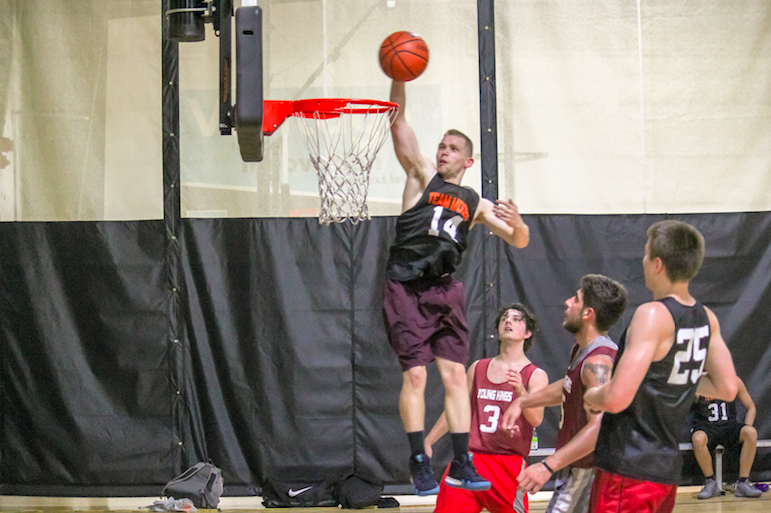 The playoffs are finally upon us and this interesting First Round matchup include two teams, Team Moose and the Young Kings, that finished the regular season lower than expected.

After going undefeated to start the first five weeks of the season, Team Moose’s consecutive losses in Weeks 5 and 6 ultimately placed them in the imperfect situation they are currently in entering the First Round of the playoffs.

At the other end, the Young Kings sunk to the No. 13 seed as a result of RPI rankings, despite finishing as the eighth team in last week’s power rankings.

Although the last meeting between these two teams was a 108-80 blowout in Week 3, this playoff matchup could be more intriguing than most may predict.

The Young Kings have not been able to have a full lineup for the majority of the season, but when they do, there is strength throughout their roster. Myles Raymond leads the way in terms of star power, but his support comes from three-point specialist Eddie Whitman, tough big man Marquis Davis and a potential Defensive Player of the Year in Dante Abbatte.

Despite losing some players permanently, the Young Kings know that stopping Team Moose won’t be easy, but it will be necessary in order to come away with their first win since July 10.

“We know the offense is fine. Our defense was the big focus.” Young Kings’ Eddie Whitman said following the team’s last win over the Head Hunchos.

Team Moose, who possess six players that average double-figure point totals or more, knows that their offense will be present no matter what the situation is. Just like their counterpart, playing strong on their own side of the court will be a point of emphasis heading into the playoffs for the No. 4 seed as well.

“Like I said every week, it’s a committed effort to play defense,” Melquan Horton said following his team’s Week 9 victory. “Earlier in the season we were talking and we realized that we were a little too passive. As you could see in the last few weeks, some aggression out of Brad (Seaman), some aggression out of [Matt Mazzochi].”

But the defensive focus should not downplay the team’s ability to play sound offense as well.

Team Moose has the lowest number of three-pointers made in the league, but instead of looking at it as a negative, it should be viewed as an ode to the way that Moose likes to play with the ball. Instead of forced shots, there is always a tactical method behind the offensive madness and it usually results in a safe shot close to the basket.

It is clear that Team Moose comes into this First Round matchup with the upper-hand, but the Young Kings are not the typical No. 13 seed either.

In order for the Young Kings to pull off the upset, they will have to lean on their offensive weapons, starting with Myles Raymond, to keep up with the rest of Team Moose’s consistent and collective efforts with the ball. Being strong defensively will be a tough task for the Young Kings, considering how loaded Team Moose’s offensive is, but they should not be fully counted out quite yet.