Playoff Preview: No. 5 Goon Squad vs No. 12 Air Ballers 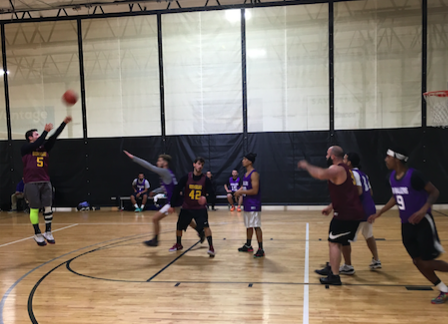 A team that barely missed a first-round bye will take on an Air Ballers squad that has not tasted victory once this year in the first round of the Fall 2016 Playoffs. Both Goon Squad and Air Ballers are teams that have rode the back of one player, to varying degrees of success: Matt Marconi for Goon Squad, and Jaylon Smalls for the Air Ballers.

The difference is their supporting casts: Goon Squad is fraught with hard-nosed defenders like Gordon Soper (1.2 BPG), and two-able scorers in Brandon Massaro and Matt Delmonte.

Conversely, the Air Ballers only other player who averaged double-figures in scoring, Jonathan Cordero, shot a putrid 28-percent from the field on the year. Their major shortcomings include secondary ball-handling and perimeter shooting (19 percent from three).

These pitfalls are coupled with an utter lack of transition defense or any semblance of spacing on the floor has spelled disaster from the season’s opening jump. Their Week 5 54-point loss to The Brotherhood was a microcosm of their entire season, in which they tallied over 25 turnovers (we stopped counting).

Each team’s scoring dynamo, Marconi and Smalls, both tallied more than 20 points in their Week 6 matchup against each other.  Contrary to his performance over the regular season, Smalls connected on 4-of-11 three-point attempts against Goon Squad (he shoots 24-percent on year). Their team shot 10-percent worse from the floor (18-for-54) than their season average of 43 percent, which came as no surprise as Goon Squad has been referred to as one of the best defensive squads in the league. Things could get ugly considering the Air Ballers have the least assists in the league, as well as the most turnovers.

Remarkably, the Air Ballers scored 48 fewer points on the year than One Time, who is also yet to capture a win. This does not bode well as Marconi has scored 111 points combined over his last three games. For comparison, the Air Ballers as a team have managed to score just 158 points over that same period. Marconi is certainly in the conversation for Legacy Leagues Most Valuable Player, carrying this rookie squad to the 5-seed.

When Goon Squad faced off against the Legacy Leagues’ only other winless team (One Time), they put up 102 points. Aside from a miracle, the only question about the result of this game will be the margin of victory. As prohibitive favorites, Goon Squad will hope to build momentum with a victory before taking on the 4-seed Temptations in the second round of the playoffs, a team that only surpassed them in the Power Rankings in the last week of the regular season.