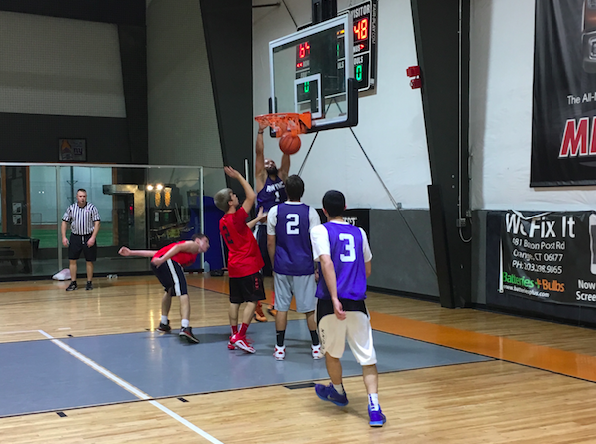 Over the course of the last month, these two squads have been charting very different courses. Run TMC, formed this season by commissioner Joey Zocco, surprised us by opening the season by dropping their first four games. After four weeks, they found themselves at number nine in our Week 4 Power Rankings, sharing an 0-4 record with their first playoff opponent.

Despite dropping their first two games, One Time was number eight in our Week 2 Power Rankings, equipped with our then-leading-scorer, Eric Rankin. The future looked bleak for this One Time squad in the wake of Ranking’s departure, but this cleared the way for a new player to rise into the Legacy Leagues statistical leaderboards. Mike Cody has averaged over 20 points per game while also grabbing six rebounds a game. Despite his heroic contributions, the team has yet to win a single game – a distinction they share only with the winless and aptly-named team, the Air Ballers.

This season, No Limit has been known for their high volume of three-point-shots. Their ability to eviscerate defenses from the perimeter has been a recipe for offensive success. One Time has tried to replicate this formula, but with mixed results. Factoring in the regular season finale in which they shot 43 three-pointers, they actually attempted the most threes this seasons (295). They have converted on 22 percent of these long-range bombs, a few percentage points below the league average of 26 percent.

Despite remaining winless during the regular season, they do have some momentum heading into the playoffs. They scored their season-high for points (92) in Week 9 against the Cereal Killers. Steve Koripsky managed to take home Week 9 Player of the Week honors with 31 points and 11 boards. Suffice it to say, this team is capable of getting hot.

On the flip side, Run TMC turned around their first-half skid by ripping off five-straight wins. As the analysts has frequently alluded to, their torrid win streak was catalyzed by the injection of point guard Reggie Stewart. A team that ranks in the middle of the pack in almost all statistical categories, leads the league in one pivotal area: assists. Armed with two players in the top-10 in assists, Stewart and Matt Zocco, Run TMC has been great at facilitating and only taking good shots throughout their win streak.

I said after their regular-season finale victory over the Titans that, “Reggie Stewart continues to be the tempo-setter for Run TMC, playing tenacious defense, hitting the glass, and running the fastbreak. His contributions will be pivotal in the team’s success going into the playoffs.”

Against One Time, a team that rests on the laurels of Mike Cody, Stewart’s contributions on the both sides of the floor will be pivotal to prevent the massive upset.