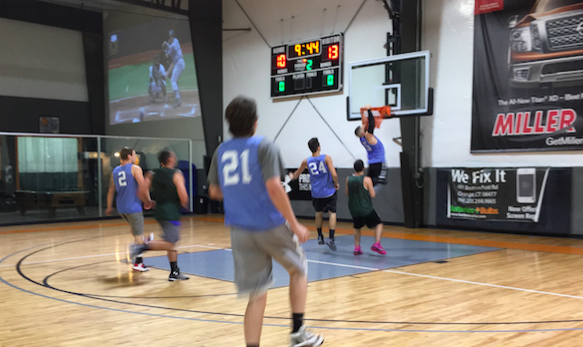 This seven-ten matchup that will appear in our opening round of the playoffs brings together two West Haven based teams who have changed drastically since their week one matchup, yet still match up extremely well. Loaded with upset potential, this game will be decided by who turns the ball over the least.

These two teams enter with two very different records: Blood, Sweat and Beers is 5-4 smack dab in the middle of the standings tied with Run TMC, and The Kekambas enter with a 2-7 record, good for tenth in the regular season.

Blood, Sweat and Beers started the season undefeated, winning their first four matchups against some of the teams that occupy the bottom of the standings. Winning games against new addition teams, Titans, Air Ballers, a struggling Cereal Killers team and of course the Kekambas by slim margins set the stage for a season that differed from their last.

Their last five games this season were trouble for this underdog squad. Winning only one of their last five and scoring an average of 47 points per game, BS&B has backed their way into the playoffs and into the seventh seed.

With only two players averaging double digit points on this squad, they have relied on team chemistry and ball movement to win games. Cody Dileonardo, who averages 11.8 points per game this season while shooting 51 percent and blocking 1.5 shots per game, is his team’s top performer and has been able to infuse energy and enthusiasm at times when his squad really needed it.

His teammate, John Brolet, has been an equally great contributor to this team’s efforts and was the Week 2 BTX Global Player of the Week. Averaging just under 10 points, while snagging nearly seven rebounds a game, Brolet and Dileonardo have been bright spots in a quickly fading BS&B team, and will need to big games from these two players if they want to avoid the upset.

On the other side of the court is The Kekambas, a new team this fall that assembled itself into a full squad by week three and saw success follow suit with a big win over Run TMC in week four. They found their star that day in Chris Aaron, who is the only representative from his team in this season’s All Star game.

Aside from the win against a totally different Run TMC team and a bottom dwelling Air Ballers squad, this team has struggled throughout the season to find scoring from someone other than Aaron, and have been on a five-game losing streak since their win against Run TMC. A team that prides itself as a rough and physical squad, certainly talks the talk as their Twitter game is very strong and enjoys the mayhem they cause. We’ll have to keep our eyes on their timeline to see if the jawing will be directed towards their first round opponent this week.

This all being said I believe there is a strong chance we see a first round upset. The Kekambas play physical, fast basketball and are a very different squad since they last met BS&B over two months ago. BS&B is a team on the down turn after losing four straight and shooting only 41 percent as a team. They will have to channel the BS&B spirit of yester-season to avoid the upset so many think is coming.