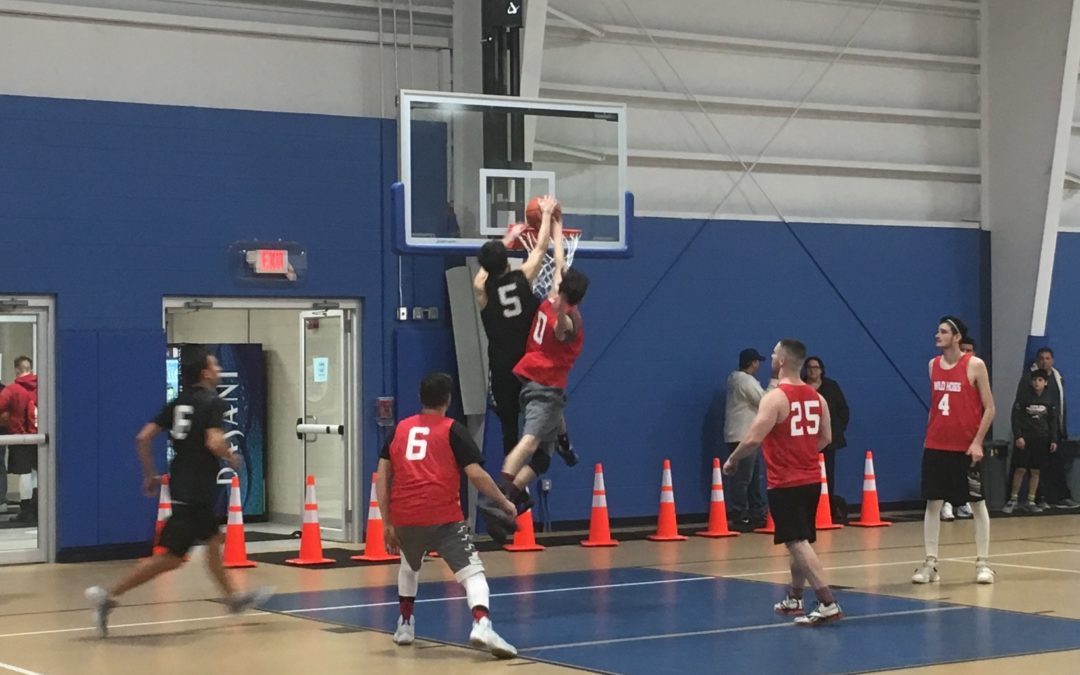 Prestige Worldwide picked up their second win of the season tonight in a back-and-forth battle against the Wild Hogs in a 55-50 victory.

Mike Bandieri brought the game within 3 in the final seconds, but it was too little too late for the Hogs. A few free throws at the end was enough for Prestige Worldwide to remain undefeated.

The Hogs enjoyed a small lead at half, 26-25, but saw that shrink to a four-point deficit by the start of the fourth quarter. Baskets were hard to come by for the Hogs after the half, as Prestige stepped up their defense late in the game. Shaine Patrick blocked three shots in a row early in the fourth quarter, totaling four on the night.

“That’s something I’m working on, I’m going for that block record,” Patrick said after the game. “Defense is what I’m going for, I’m not going to try and score the ball. Blocks all day.”

Prestige Worldwide was able to capitalize on their free throws during the game, too, scoring 14 points from the charity stripe throughout the matchup. Twelve of those points can be credited to last week’s Player of the Week Bryan Yarce, who took 15 shots from the line. In comparison, the Wild Hogs only made nine trips to the line as a team.

Yarce’s 28 points carried Prestige through a game that was a nail-biter up until the final seconds. Yarce also racked up six assists and six rebounds to go along with three steals on the night.

Bandieri, in his Legacy Leagues debut, led the Wild Hogs with 21 points and 14 boards, followed by high-flying teammate Joey Coro, who had 16 points in his own debut. The duo combined for 37 of the team’s 50 points.

The Wild Hogs, still searching for their first victory, will try and hand Swish Kabobs their first defeat next Wednesday. Bandieri will go up against fellow rookie Tyler Barbosa of the Swish Kabobs in a matchup of former interns. Both Bandieri and Barbosa were analysts for the RI Fall League in 2017.

On the flip side, Prestige Worldwide now stands as one of the three undefeated teams remaining. They look to keep it going next week against Green Squad, who sits at 1-1.

“We all know each other so it’s just chemistry at this point,” Patrick said. “We don’t like to lose. Just keep grinding.”