Rankin not limited, but No Limit escapes with win 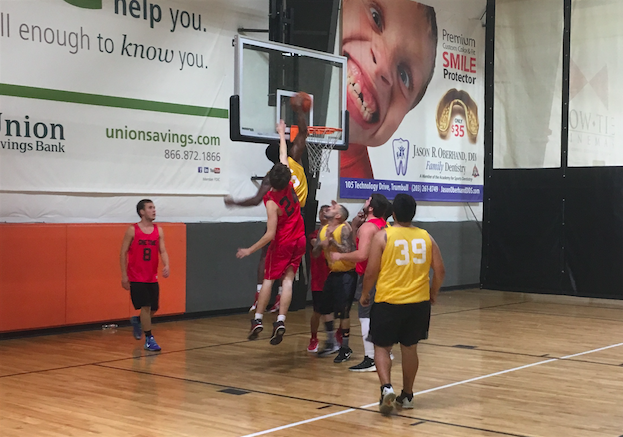 After a nail biting loss during week one to the defending champions, No Limit  was able to squeeze by One Time for a 90-86 victory, clinching the win in the final seconds.

No Limit (1-1) came out with a quick 15-point lead to start the first quarter as if there was no stopping the experienced squad. Eric Rankin showed up at the beginning of the second quarter and revived One Time (0-2) to bring them within three points before halftime.

Tarrell Vargas led No Limit with 29 points, going 12-for-21 from the field and grabbed seven rebounds. Down the stretch Vargas ended his night early by fouling out for the second straight week, leaving his team a four-point lead with minutes to spare.

Fortunately, Howie Miller was able to keep his team in the lead by going 8-for-11 from behind the arc for a total of 26 points. Miller splashed three three’s in a row during the middle of third quarter, as if there was no stopping the sharp shooter. Miller and the rest of No Limit were able to stretch their lead back to double-digits by the end of the third quarter.

Eric Rankin is seemingly the whole team and without him, One Time would have had extreme difficulty pulling off a close game to a well-oiled and experienced team like No Limit. Rankin not only drives to the hoop and finishes everything under the rim, whether it is a crispy finger roll layup or a posterizing slam dunk, but also facilitates the ball to his whole team, getting them wide open for great opportunities around the basket. Rankin dropped 30 points in the Week 2 loss.

“Eric came into the game,” No Limit’s John Rullan said when asked what allowed One Time to get back into the game. “That’s pretty much it, and that’s all they really have.”

Without Rankin, One Time would not be remotely close to compete with half of the teams that are in the Legacy Leagues, but the number nine team in the league needs to keep chipping away at teams’ heels, and work together, to produce a couple of victories.

One Time goes on to face the grueling Temptations, which will be another difficult team to beat. With Rankin’s help, there is a possibility One Time can pull out a win, and with more time on the court together as a team, improvements could be on the horizon.