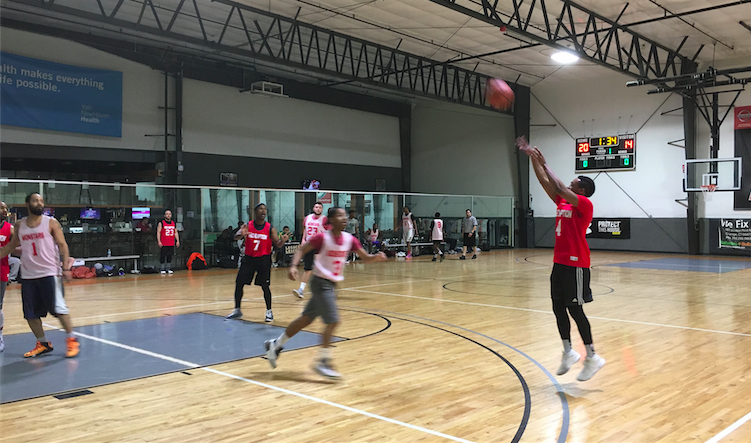 After a back and forth game with the Monstars trailing close behind throughout, Red-emption held on to grasp a 63-54 victory.

“They are a very athletic team. They are quick, very aggressive, I felt like they were going to cause some problems and stuff like that so I was hoping that our match ups, you know, we did what we had to do individually, and help each other out as a team. And looks like that’s exactly what happened.” Red-emption’s Joel Castillo said.

Red-emption played a slow game, passing the ball multiple times trying to find the best shot to put up. Red-emption was missing some of their bigger players, therefore losing the advantage of being able to get the ball to the inside for easy field goals, lay ups, and dunks.

Monstars on the other hand played their usual fast paced game. There was also quite a bit of ball hogging and hero-ball from the Monstars which resulted in multiple plays where players would drive to the basket, ignoring their teammates, and hitting a wall of Red-emption defenders.

“There’s always room for improvement. I mean rebounding, today we played a little bit smaller. We’re missing out on a couple of our bigs; Pete, Matt, Christian, so a lot of the smaller guys, like myself, had to step up with boxing out and focusing on the fundamentals.” Castillo commented.

Jalen Graham from Red-emption showed once again that he is MVP material as he led his team to victory. Graham finished today with a double double, scoring 28 points with 13 rebounds. Graham also hit eight of his nine free throws. Mike Freeman and Joel Castillo backed up Graham scoring ten points each.

“We play based on what they give us. If we were passing a lot more it’s because we were taking our time to get good looks instead of rushing the game because I think that’s more along their lines; a quick fast paced game, so we tried to take what they would give us.” Castillo added.

Both teams’ regular season is officially now over. Monstars and Red-emption have proved to be strong teams during the regular season and will have to sit and wait for the rest of the games to unfold before their playoff seeding is determined. Regardless, these are two teams poised and capable of making an extended playoff run.