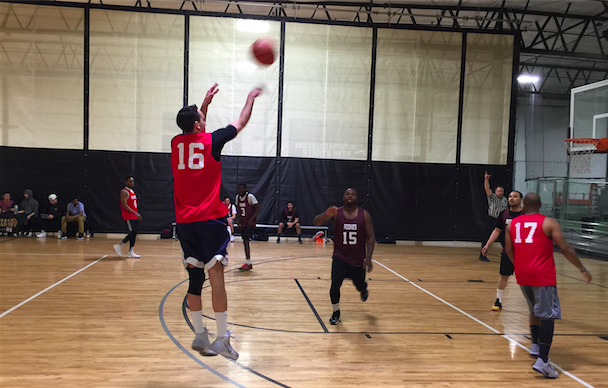 Monday night was a battle of Legacy Leagues heavyweights, all fighting to get into the Final Four. The Rookies were the underdog coming off a first-round upset against The Firm, but unfortunately their upset-story ended in a tough loss to Red-emption Monday night, 76-59.

Even though Red-emption came into the playoffs with the three-seed and The Rookies entered at the 11-seed, the matchup felt like it was up for grabs at the opening tip. The game was close early on, with each team going back and forth exchanging buckets. At the end of the first quarter, the Rookies found themselves only down three.

But, from the second quarter on, Red-emption just took their play up to a whole different level. Everything seemed to be clicking for them on offense, led by the three-headed monster of league MVP Jalen Graham, Pete Sklarz, and Scott Corchard.

Corchard was the team’s best overall player on the night, although the box score may not reflect that. He was coming back from an ankle injury that sidelined him for the end of the regular season, and he looked as sharp as ever on the court. Graham and Sklarz each had 22 points on the night, while Corchard tallied seven points and five assists.

Despite the Red-emption win, the best player on the floor tonight happened to play on the losing team. Eric Singleton single-handedly put his team on his back, giving it everything he had on both ends of the floor from start to finish. He ended the night scoring 35 points, accounting for almost half of the entire team’s offensive total. He did get some help from All-Star teammate Jhamal Jones, who also scored 13 points.

After the game I asked Graham what they did in the second-half to put the game away.

“We changed our intensity, our defense…we just stepped it up on defense as a team,” Graham said.

That is certainly something they are going to need to keep up Tuesday night as they take on Run TMC in one of the semifinal matchups at 9:15pm.