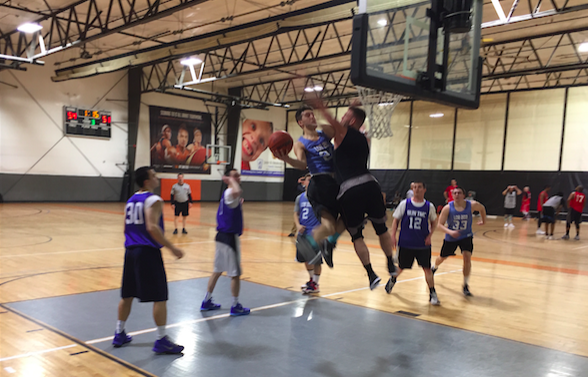 After an unexpected game with a surprising amount of made shots, dunks, and impressive play, Lob 203 won their third game of the season against Run TMC. Run TMC was heavily favored coming in, nonetheless Lob 203 was able to win by the score of 77 – 65.

Lob 203 played a much different game than we have seen this season. They hit the ground running, barely missing any shots in the first period and finished the quarter ahead 28 – 12. Run TMC fought back in the second quarter with their usual fast-paced game and quick ball movement but to no avail. Despite better play they went into halftime still down by 10.

“We like to play hard, I don’t know, we just go out here and play hard and whoever is in our way we try our best to stop their best guy and just make it work.” Dileonardo said.

Lob 203 has had trouble finishing their games in the past but tonight their story was different. They played hard defense, forcing Run TMC to rush shots, miss shots, and on a few occasions block Run TMC’s shots during the second half. Down the stretch Lob 203 exploded in the fourth quarter with 23 points, completely diminishing Run TMC’s chances of winning.