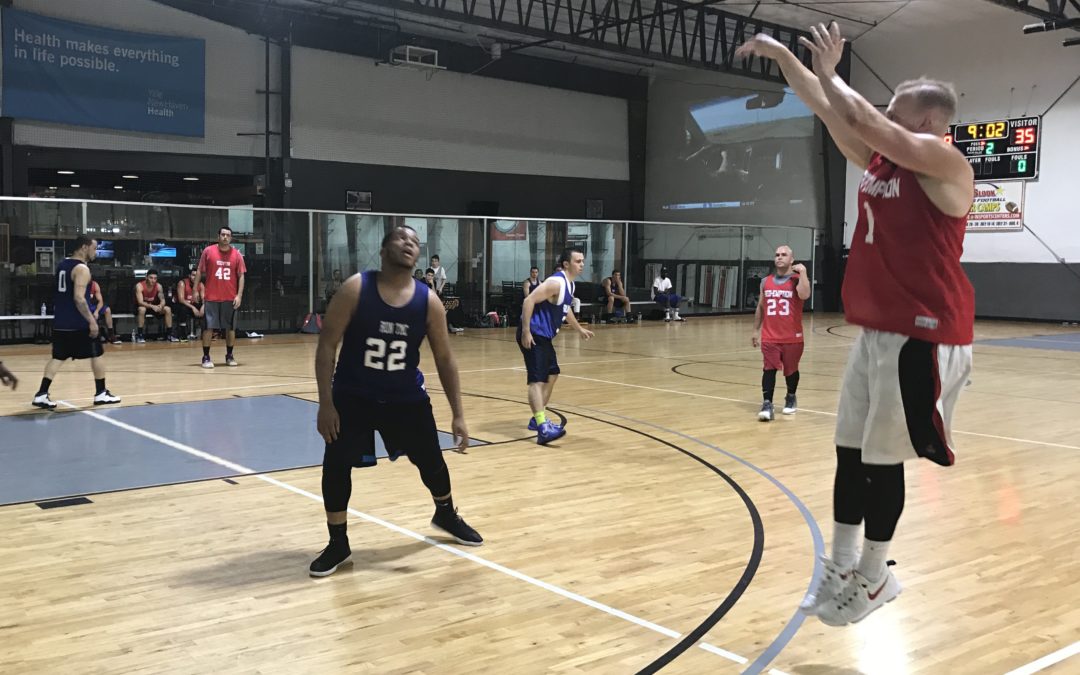 With an enticing opportunity to redeem themselves of their Winter ’17 Seminfinals loss Monday night, Run TMC lost in overtime to Redemption, the same team that eliminated them from those playoffs just two months ago.

Even without the winter’s Most Valuable Player Jalen Graham, Redemption was able to erase a 10-point deficit with under four minutes to play, and later outlasted their opponent in an overtime thriller, 81-76.

“We were down pretty much the whole game,” Dom Migliaro said. “We played a great Run TMC team. But we battled back really hard with good defense at the end and good pressure, and we pulled it out.”

Very similarly to their matchup in April, neither team was able to create separation from the other until very late in the game. Neither team outscored their opponent by more than two points in a single quarter until Redemption scored eight points in overtime to Run TMC’s three.

Will Hudson and John Rullan were the main attractions for Run TMC despite the loss. Each scored over 20 points, the only two players on the team who eclipsed double-figures. Hudson scored 24 points on 7-of-10 shooting, while grabbing 12 rebounds. The double-double is Hudson’s third in as many games this season. Rullan, who missed last week’s game against STP, scored 20 points on 8-of-16 shooting, including four three-pointers made.

While Run TMC’s scoring was predominantly led by just two players, Redemption earned their victory through a balanced scoring attack. Five of their seven players finished the game with at least 10 points, highlighting their ability to spread the ball as a unit and not relying on just one or two individuals. Both Migliaro and Joel Castillo led Redemption with 16 points. Castillo hit four of his five shot attempts from behind the arc, while Migliaro grabbed a team-high nine rebounds.

Christian Terrell (13), Scott Corchard (12) and Erik Silva (10) were the other three Redemption teammates who surpassed the 10-point scoring mark for the winning side.

Run TMC appeared to be pulling away late in the fourth quarter, reaching a 10-point advantage with just under four minutes left to play in the game. However, with several hustle plays and better shot selection, Redmeption found a way to stage a late comeback to tie the game before the buzzer sounded.

“I don’t think we took a lot of good shots today,” Migliaro said. “We made sure to take good ones at the end.”

Run TMC mustered just three points in overtime, unable to combat the momentum Redmeption gained from their improbable comeback to force the final period. In the end, Redemption’s points in the paint came too easily when Run TMC needed defensive stops the most.

Redemption improves to 2-1 this season with their win and will face a favorable matchup next week with the Bad Boyz. Run TMC, who entered the season as one of the top title contenders, is now one of 11 teams already below the .500 mark. They’ll look to work out their early-season issues next week against a winless Double Dribblers team.