Rim Breakers fight hard, but fall to The Chasers in Quarterfinals 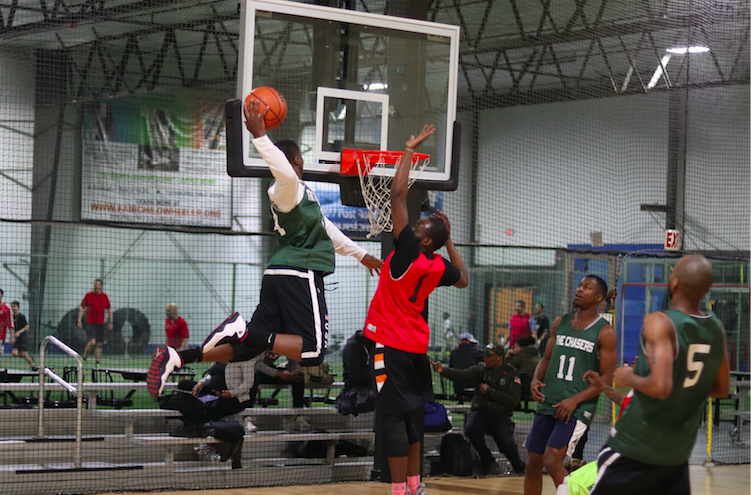 After a shaky regular season for the No. 6 Rim Breakers, they came out to prove to the league their team’s worth during the playoffs. Despite a hard-fought battle against The No. 3 Chasers, they ended their season with a 74-66 loss in the Quarterfinals.

Both teams started out hot offensively, with The Chasers up 11-10 after the first four minutes. The rest of the first quarter was slow for both teams; turnovers and missed shots causing the slump on offense. The Chasers led by six going into the second quarter.

During the second period, the Rim Breakers got into their groove, outscoring The Chasers 19-13. They went on an 8-0 run to end the quarter and though they never had the lead, the Rim Breakers found themselves tied at 35 going into the half.

Richard Bronson and Kievon Turnbull both had monstar nights for the Rim Breakers. Bronson had 29 points and 11 rebounds, while Turnbull added 20 points and 16 rebounds. Tevin Jones had eight points.

The third quarter went back-and-fourth between the two teams, The Chasers were outscored 15-11 and were down has much has four. However, they rallied in the fourth to avoid being knocked out of the playoffs. They scored 28 points in the fourth quarter while limiting the Rim Breakers offense to only 16 points.

The Washington brothers took over The Chasers offense, combining for 45 points and nine rebounds. Diontay Washington also had five assists. Jayron Vines put up 14 points on 87.5 percent shooting from the field. He also had seven rebounds.

The No. 3 Chasers move on to take on the No. 2 Blue Devils in the Semifinals.

“We’re going to blow them out,” Diontay Washington said.

The Blue Devils beat the Flint Tropics 59-51 in their Quarterfinals matchup Tuesday night.