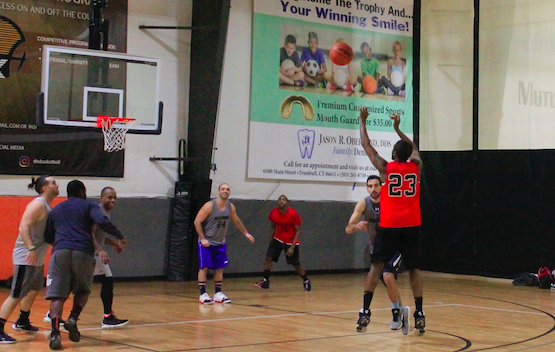 The Rim Breakers use big fourth quarter to earn their third-straight victory, 89-77, over a struggling NickStrong squad.

NickStrong’s struggles continued Monday night. With the loss to the Rim Breakers, they find themselves sitting at 1-6 on the year. They kept it close through the first three quarters, however, their short bench left them fatigued in the fourth.

NickStrong was playing with only five guys Monday night, and despite a strong 24-point performance from Ryan Florentine, they drop their third in a row.

As a team they shot 47 percent from the field and 100 percent from the free throw line. Richard Bronson led the team in scoring with 21, but had help from teammate Gerald Mclease, who added 20 points and seven rebounds in their 12-point victory.

The Rim Breakers are piecing it together toward the end of the season and can be a serious dark horse come playoff time.

“We feel real good about the post season, toward the end of the game we started locking down on defense,” the Rim Breakers Chris Leak said. “As long as we continue that mentality throughout the playoffs, we should be alright.”