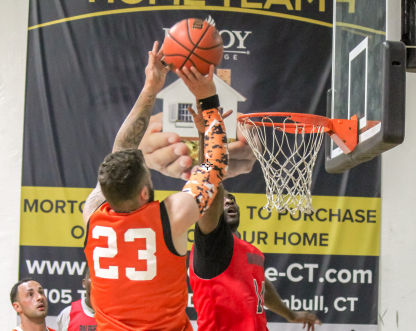 With the score knotted up at 43 a piece heading into the 4th quarter, it was time to see which team would generate a late push to victory. In the end, the Rim Breakers were that team as they defeated Sportslook 64-60 in a hard-fought Week 2 matchup.

Thanks to another strong performance from Keivon Turnbull, who led the way with 23 points going 9-of-10 from the field, the Rim Breakers improve to 2-0 on the season. However, it wasn’t just a one-man show as Turnbull had some assistance from his teammates: Chris Leak, Tevin Jones, and Richard Bronson who added 35 points collectively en route to the team’s second-straight victory.

The Rim Breakers high energy and aggressive defense made the difference in the 4th quarter as they were able to create turnovers and turn defense into points at the other end of the floor.

” Press, Press, Press,” Rim Breakers Richard Bronson said. “They had four players so we had to press them, they were tired.”

Sportslook’s (0-2) lack of depth was their kryptonite in this close contest, as they only had four players and no substitutes. Fatigue set in during the fourth quarter and was ultimately the deciding factor in the game. Sportslook put together another hard-fought effort for the second week in a row and continues to stay in games and gives quality teams a scare, even with only four players, including Matt Ramos playing through injury. A big part of Sportslook being able to hang around in the game was due to the efforts of John Zervos, who scored 29 points and grabbed 11 rebounds.  Dan Kokkoros also added 16 points and 5 assists in the loss.

Sportslook will try to bounce back in Week 3 as they take on Nickstrong (1-1) next Monday. Rim Breakers will look to continue their hot start against a very dangerous Shocker City (2-0) team. When asked about the challenge of facing such a successful and feared team, Rim Breakers didn’t hold back.

“It’s our league now,” Bronson added. ” Who is Shocker City? Mike Davis we are coming for you.”