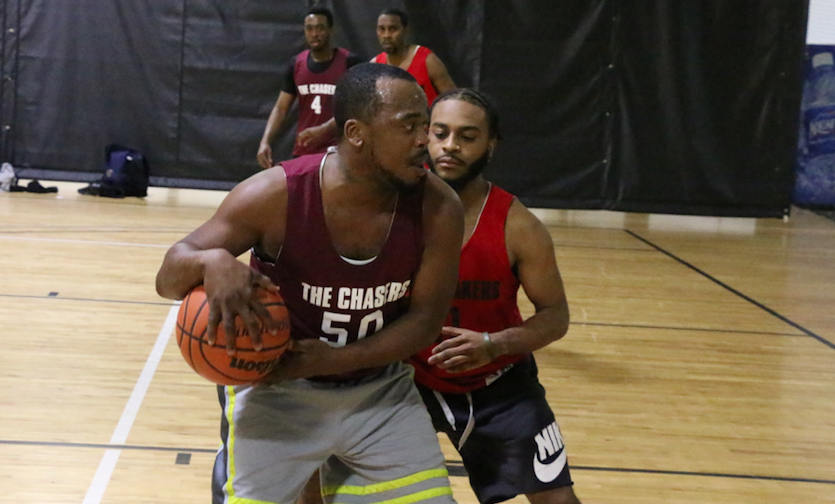 With five seconds left in the game, The Chasers found themselves up by three and had the ball to inbound. The pass floated to the free throw line where it was intercepted by Carl Fairfax. Fairfax, with just ticks left on the clock, dribbled down the court and hoisted up a game tying three. At that same moment, the the Rim Breakers’ Zacarri Graham leaped into the air and blocked his own teammates shot as the buzzer sounded.

The blunder by the Rim Breakers, handed the victory over to The Chasers, 86-83.

It was definitely a tough loss for the Rim Breakers tonight, especially after getting a technical foul for calling an extra timeout and fighting those two big leads earlier on in the game.

By accident the Rim Breakers called a timeout in the final minute of the fourth quarter. This cost them two free throws and the ball which was an essential part to help win them the game. There were arguments from both teams and the Rim Breakers were trying to defend themselves saying that they didn’t call timeout.

After the game The Chasers were asked what was actually said on the court during that final minute and they responded saying that “They definitely said timeout, he covered his mouth right after he said it. They knew they called it by mistake.” If that timeout wasn’t called that could have been a completely changed the outcome of tonights game.

The Chasers had two 13 point leads tonight. One of them came in the third quarter leading into the fourth and the other in the first. The Rim breakers came back from these leads thanks to the help from Kintwon Miles who had 29 points, but unfortunately that wasn’t enough to stop The Chasers who had Brandon Seabrook and Dominique Langston who combined for 41 of their teams 86 points. After the game the Chasers were asked who they look forward to playing and they responded saying “Shocker City, we want them!” With that being said we have a lot to look forward to next week.