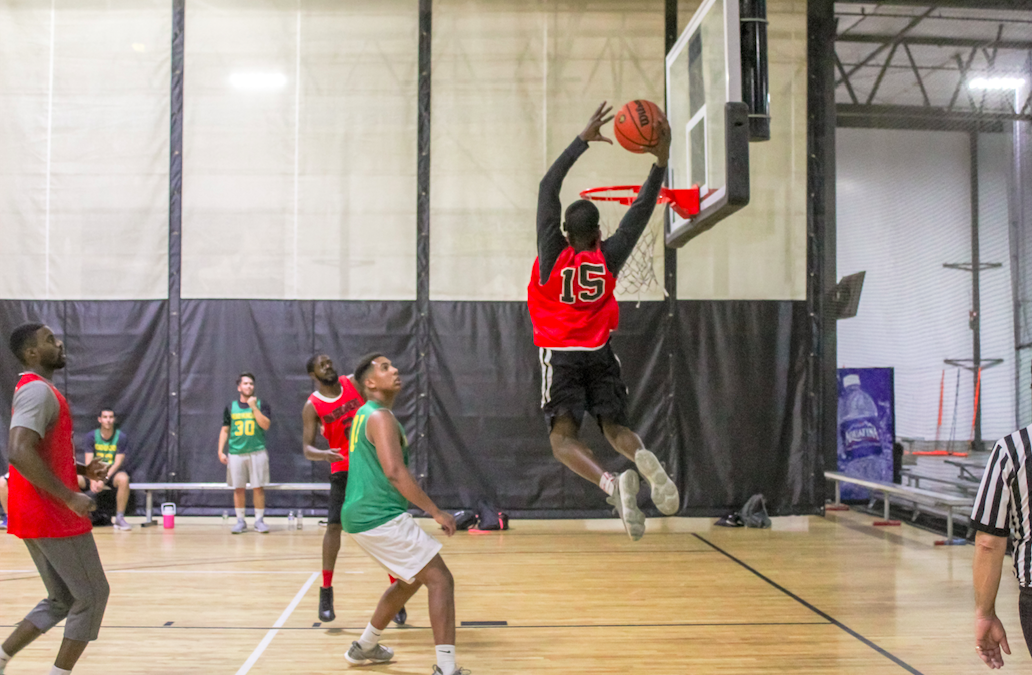 The Rim Breakers (8-1) showed no mercy against the Head Hunchos (2-7) en route to a 45-point victory (111-66) and a first-round bye in the playoffs on Monday night in Trumbull, Connecticut.

Contrary to prior games, in which the Rim Breakers have fun with their opponents then pounce and finish them off late in the game, tonight they were hard on their opponents from the get-go. They implemented a near full-court press that forced countless turnovers and odd-man dunks all game.

“It’s locked up. Ain’t nobody ready for none of that,” Carl Fairfax said on his team’s ability to play competitively for a full 40 minutes. “Especially if we all run [the press] all the time, it’s a wrap for everybody, especially in playoff time because we’re playing for real.”

With a deep bench consisting of nine players, in tonight’s case, the Rim Breakers really did live up to their team’s name tonight. They “shot” 64.6 percent from the field, but in reality, almost all of those came from high-flying dunks.

Whether it was Richard Bronson throwing down multiple alley-oops to get things going in the first quarter, Keivon Turnbull taking it hard to the paint then finishing at the rim with two hands in the third quarter or Gerald McLease and Chris Leak’s ability to get it done with their foreheads above the rim all game long, the Rim Breakers simply dominated.

However, that isn’t to say that there was no effort from the Head Hunchos. Brett Cody once again led the way with 26 points and 7 assists, while Keenan Carey had a breakout game as he mustered 16 points and was one of the few Hunchos to consistently play up to the Rim Breakers level all night.

One takeaway from the No. 12-seeded Head Hunchos — who will face another worthy opponent in No. 5 Nickstrong come playoff time — is that two players simply could not and will not make a difference moving forward against a powerhouse team like the Rim Breakers.

Especially when it was apparent that the Rim Breakers were really taking this game seriously through their press, it was all but over from the start.

“We were just out here playing around. We knew we going to beat them by at least 50 (points), it was just a matter of when,” Fairfax added. ” … Playoff time is when it really matters. This was just for fun and trying to get our lineups right and that’s about it.”

Heading into the playoffs as the No. 2 seed, the Rim Breakers will face the winner of No. 7 Nothing Easy and No. 10 Js, Treys & Fadeaways on Aug. 13, while the No. 12 Head Hunchos hop right back into action next week in a first-round battle against Nickstrong.