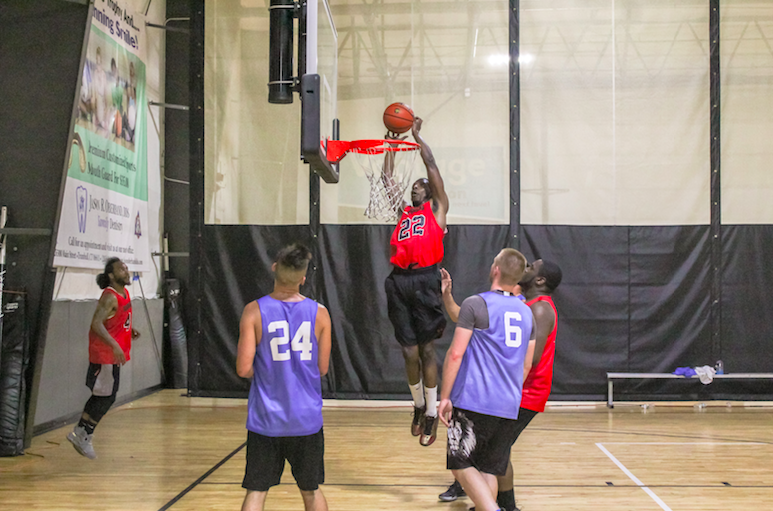 It may have taken some time to get loose, but ultimately the Rim Breakers (4-1) got it done.

Despite missing key teammates Keivon Turnbull and Richard Bronson, high-flyers Gerald McLease and Chris Leak led the Rim Breakers to a dominant second half and a 97-76 victory over Dinners Served (1-4) on Monday night.

“We all played hard like we always do,” McLease said. “[We took] control of the game and then [took] it from there.”

But unlike the Rim Breakers’ 75-point shellacking over Above the Rim last week, there were bright spots from their opponents tonight. Most notably, Dinners Served’s Kyle Coniglio led all scorers with 37 points and grabbed ten boards as well.

While the individual feat is impressive, it was not enough to contain a top-tier, deep team like the Rim Breakers. Both teams had four players put up double figures in scoring, however, it was the Rim Breakers that boasted 14 points from their bench while Dinners Served had just two.

Similar to the Rim Breakers’ full-team ability to contribute offensively, the top guns were to be reckoned with as well. With exception to Coniglio, both McLease (30 points and ten rebounds) and Leak (27 points and four assists) were the most dominant players on the court.

They found a hole in Dinners Served’s defense, took full advantage of their respective abilities and utilized both skill and physical dominance in the paint.

“It’s all part of the game,” McLease said. “Out-man them and that’s about it. They’re smaller inside, so I used it that way.”

Although the Rim Breakers were up by just four points (43-39) going into the half, it was imperative that they built upon the lead, rather than play to just maintain it. That was exactly what happened throughout the rest of the game.

The Rim Breakers turned that four-point lead into a 12-point lead after the third quarter, then ran up the gap to a 21-point lead to close out the game.

The team’s ability to flip the switch, despite playing a relatively lackluster beginning of the game shows that the Rim Breakers are emerging as one of the better teams in this league.

“We’ll have our players and everything back and if we keep playing the way we do, I feel like we’ll be good,” McLease added.

While Dinners Served looks to break out of a two-game losing streak against Nothing Easy (1-4),  the Rim Breakers will be truly tested in Week 6 when they take on The Throne (4-1).

Now that we are past the halfway point of the season, the Rim Breakers’ Zeek Howard had thoughts of his own on how his team sizes up with the best of the league.