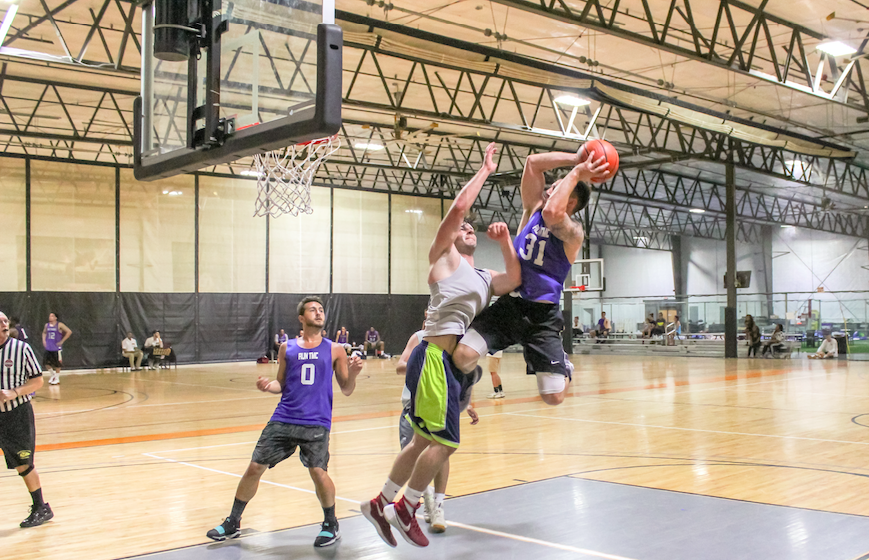 Run TMC beat Nothing Easy by a score of 105-80 to maintain their undefeated record on Monday night.

After his team’s win, RUN TMC’s Joey Zocco noted how his team’s name may have not-so-coindidently been a motivational factor in the 35-point win.

“Run, run and run,” Zocco said about his team’s game plan prior to the game. “I think it’s easy when you have Eric (Singleton) and Reggie (Stewart).”

The duo started the game by connecting on an authoritative alley-oop to put Run TMC up 10-3 early on in the first quarter, and Stewart earned two of his 33 total points on an acrobatic, reverse and-1 layup to make it a 18-7 game.

Run TMC extended their lead into the second quarter, however Slattery cut Nothing Easy’s deficit to 33-26 on an strong move in the paint. After Run DMC scored four points to close out the the half, Slattery and his team was down 37-26 at the intermission.

But that was the closest Nothing Easy would come, as Run TMC shot off the charts in the third quarter.

Not only did Stewart continue to hit buckets, but guys like Dom Migliaro and Will Hudson added points of their own as well. It seemed as though Hudson couldn’t miss from three-point land, while Migliaro capped off the quarter with a posterizing dunk to put his team up 67-46.

“That third quarter we were hitting shots like the Warriors. It comes in bunches,” Zocco added. “They played us even in the second (quarter), it was like an 11-point game and in that third quarter we just didn’t miss. So if we can do that every game it will be huge.”

Hudson continued to showcase his range by opening the final quarter off with a deep three. Stewart then stepped back into the spotlight with a deep three of his own, before finishing off a leaping alley-oop to give his team a 20-point lead at 77-55.

Nothing Easy found limited offensive success in the form of a three-pointer from Brian Lilly, who finished the night with 12 points, but it was not enough. A late three from Stewart put salt in the wound and gave Run TMC triple-digits on the scoreboard, before finishing the game off with 105-80 victory.

While Nothing Easy looks to get back in the wins column next week against Team Moose, Run TMC hopes to extend their winning streak when they take on Head Hunchos.

“We were hitting shots, getting stops and running and getting threes in transition,” Zocco said. “That’s what we’re trying to do, and we’ve got to do that for 30-35 minutes and try to string it together against the better teams in the league.”