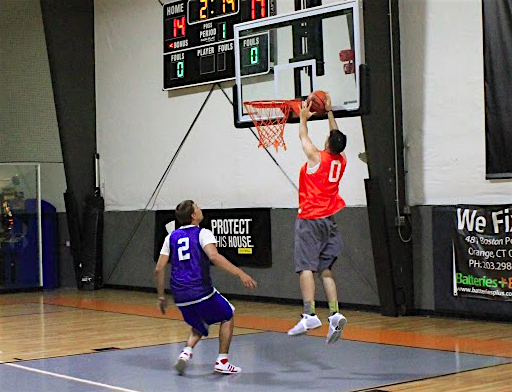 After an entertaining and competitive game that came down to the wire, an under-manned Sportslook team secured their 6th win in seven weeks by defeating Run TMC, 73-30.

Each week, Sportslook finds a way to win the game even without their top scorer, Andrew Cavanagh, who has been out with an injury for a good chunk of this season. Instead, Bryan Acevedo, and Johnny O’Brien combined for a massive 45 points that turned out to be more than enough this week.

Part of Sportslook’s team success Tuesday night was their defensive team effort down the stretch, which prevented Shaq Holman and Matt Zocco from finding their shooting rhythm when it mattered most. Holman, who ended with 22 points, shot a dreadful 8-for-21, while Zocco, who finished with 24 points, missed some key shots when it was close in the final minutes.

“We played really aggressive, and played great D,” Sportslook’s Nick Bacarella said. “We finally got on the boards, and I think our rebounding numbers are little bit more even than what they have been the past few weeks, and it really showed.

Sportslook’s accurate free throw shooting made just as big of impact as their defense, while they also took advantage of Run TMC’s mistakes.

“If you watched the whole game, you would think that (Run TMC) would have had a shot of winning at the end of the game, from how we shot the ball, but at the end we made some clutch free throws and ultimately that helped us win the game”.

Run TMC’s inconsistency has once again put them a game under .500 at 3-4, after coming off a strong win against ZewCrew in Week 6. Sportslook found a way to take off advantage of that inconsistency, and hold a spot in the standings as one of the top three teams in the league.

“We got a good team,” Bacarella said. “We’ll just keep doing what we’re doing and good things will happen.”