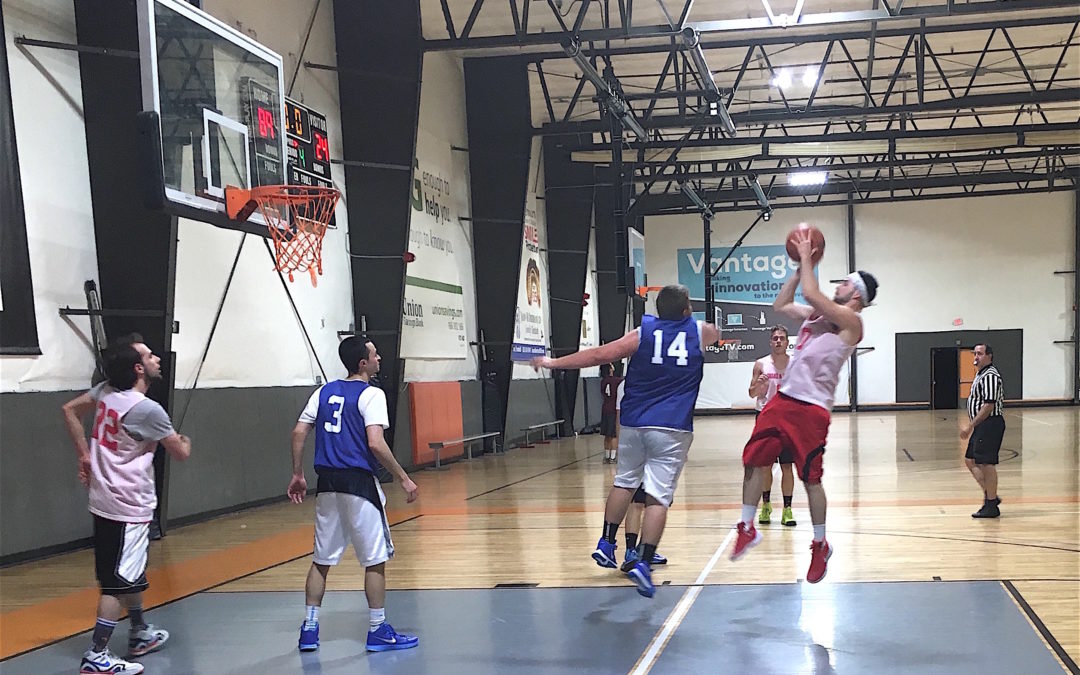 Shaq Holman’s missed 3-pointer as the final buzzer sounded gave Wake & Blake their first win of the year, 83-82, in what was the league’s best game of the season.

The contest started off back and forth, but Run TMC opened up an 8-point lead heading into the second quarter. Coming off a tough loss to The Pandas, Run TMC looked for a smooth bounce back game.

But Wake & Blake “woke” up and came out strong in the second quarter behind Carmine Santorelli, Legacy League’s Week 2 Player of the Week. Santorelli, who finished with a game-high 36 points and 13 rebounds, weaved through Run TMC’s defense handily.

Wake & Blake did a solid job limiting Run TMC’s Shaq Holman in the first half, who was coming off two monster performances.

“Well we’re aware he’s the best on the team, so we had to clamp him up,” Wake and Blake’s Stephen Rohaly said.

Run TMC held on to just a 2-point lead at the half, looking to contain Santorelli who already had 20 points, but Wake and Blake kept hanging around, jumping out to a 4-point lead by the end of the third.

Wake and Blake was able to stretch their lead to 10 with just over a minute left to play, but that’s when the game got interesting.

In the final minute, Run TMC was able to come back and take a 1-point lead thanks to strong rebounding from Will Hudson and a barrage of 3’s from Holman. Hudson led Run TMC with 29 points and 17 rebounds (13 offensive), while Holman finished with 24 points on 8-of-22 shooting.

A controversial goaltending call appeared to win the game for Run TMC, but two missed free throws from Matt Zocco reopened the door for Wake & Blake. Brad Degregorio’s tip-in reclaimed the lead for Wake & Blake and put his team up 83-82 with just seconds remaining.

To nobody’s surprise, Holman heaved up the potential game-winning shot as time expired, but it clanked off the front rim, securing the wild win for Wake and Blake.

Run TMC looks to avoid a 3-game skid next week against the Brotherhood (3-0), while Wake and Blake take their momentum up against the rising Pandas (2-1).