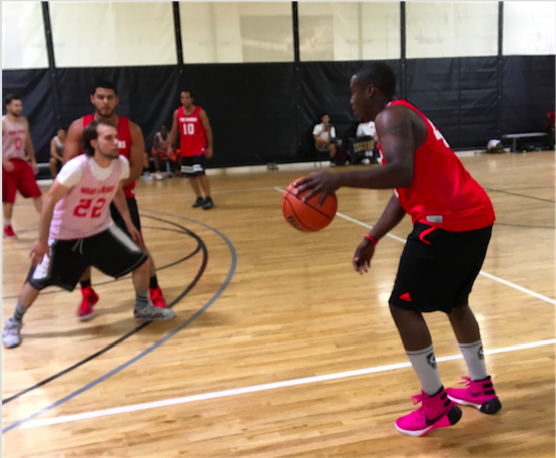 Wake and Blake’s Carmine Santorelli scored just four points in his opening week game against the Brotherhood. Since that game, he has turned on the jets and become one of the most electrifying players in the Legacy Leagues.

Santorelli’s tear continued on Tuesday night as he exploded for a season-high 40 points and gathered 12 boards in Wake and Blake’s 82-76 victory over the Pandas.

“Like I said last week, Carmine is the best player in the league times ten,” Wake and Blake’s Stephen Rohaly said. “He not stopping and nobody is stopping him. Nobody can guard him. It’s like impossible. Everybody is just like a garbage can when he’s coming to the rack.”

The Pandas jumped out to a 13-6 lead in the first five minutes of the contest. However, Kevin Bott and Steve Koripsky combined for a 7-0 run to even it up for Wake and Blake as the team took a 22-19 lead into the second quarter.

Down 31-29 with just under six minutes left in the opening half, Santorelli scored seven points on a 9-0 Wake and Blake run. The Pandas sparked a run at the end of the second quarter and trailed 39-35 going into halftime.

Christopher Dias, who finished with a team-high 33 points for the Pandas, says his team played well in the first half despite missing Jelan Mason (25.5 PPG) and Rondell Jones (21.5 PPG, 11.5 RPG) for the game.

“I think we did good,” Dias said. “[We] just need to move the ball more to the middle, get some drives and kick it out instead of driving in and everybody trying to finish on their own,”

Wake and Blake held a 14-point lead over the Pandas with a little over nine minutes to go in the game, when Joe Spain, who finished with 29 points, hit a 3-pointer with about seven and half minutes on the clock to shrink the Pandas’ deficit to seven points. Spain would later hit a jumper to make it a 71-67 game with three and a half to go.

Yet, Santorelli shut down any attempt the Pandas made at a fourth-quarter comeback.

Santorelli made consecutive jump shots to make it a 75-67 game with less than three to go. In the dwindling minutes, the Pandas began to foul to stop the clock, and nearly crawled back into the game. However, Santorelli scored nine points, while shooting 7-for-8 from the free throw line, in the final minute of play to seal the victory.

The Pandas will look to knock off the undefeated Brotherhood (4-0) next Tuesday night. Wake and Blake, on the other hand, will look to pull even with ZewCrew (3-1) in the Legacy Leagues standings in a week five showdown next Tuesday.

Rohaly says he has already given the advantage to his team’s speed demon in a matchup against ZewCrew’s human highlight reel.

“We’re just going to beat everybody else,” Rohaly said. “Carmine is going to windmill on Mark Harrison I think.”