Semifinal Preview: No. 2 No Limit vs No. 6 Run TMC 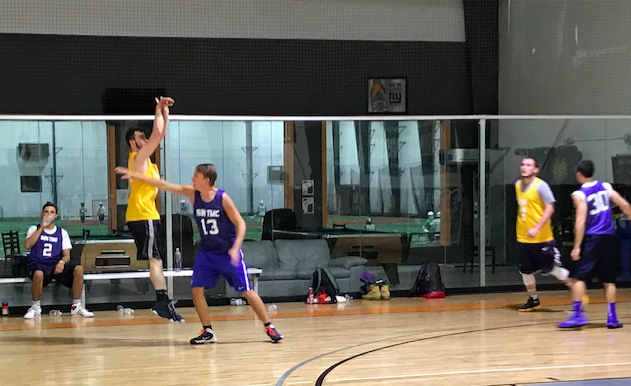 When we last saw these two teams battle in Week 7, No Limit was the clear favorite and looking strong with only one loss. Run TMC was 2-4 at that time, and was trying to get back to .500. We all know what happened, as Run TMC pulled off the upset. Both teams have yet to lose a game since then, but one team much closer to defeat the last time they took the court than the other.

Run TMC powered to a statement win over Sportslook, 84-66 with star Reggie Stewart going for 33 points and 16 rebounds, while Ronte Byrd catapulted his No Limit squad past The Kekambas, 57-54 when he hit a game-winning three-pointer sending them to the semis.

It’s funny to think that 6-seed Run TMC could be the favorite over a 2-seed No Limit squad simply because of the momentum coming into this game. Run TMC plays very fast, and will try to turn missed shots into quick points down the floor. They also sport a very good shooting team, shooting 36.5 percent from three. Run TMC has shot 51.5 percent from the floor during their two playoff wins, averaging 100 points per game.

Headlined by Reggie Stewart, Run TMC has talented shooters like the Zocco Brothers, Matt and Joey, who have found their range during this playoff run, going a combined 12-for-29 (41%). Ty Alston and Nic Civale both have the range, but are potent playmakers when they want to take it to the rack. Alston is averaging 16 PPG in the playoffs, while Civale contributed eight to the win last week before leaving with an injury. The Blake Brothers, Kevin and Brian, are agile big men that can stretch the floor, as well as consistently battle down low.

It will be another tall task in slaying the “three-headed monster” and the rest of No Limit, as the whole squad seems to be just as talented and skilled as Run TMC. John Rullan returns after a one-game absence, and his squad seemed to have missed him and his outside shooting.

His teammates tried to pick up the slack, going a dismal 7-for-32 from three (21%) against the Kekambas in the quarterfinals. This team can live and die by the three-pointer, as we all saw last Tuesday night, but they sport a lethal combination of talents and depth across the roster.

Tarell Vargas is an extremely capable playmaker and will put his team on his back if needed, recording either a double-double or triple-double in all but four games this season. Howie Miller is the team’s best perimeter shooter, shooting 36.6 percent from deep. He can be scary when he catches fire and knocks a couple down in a row.

We can’t forget the hero from the Quarterfinals, Ronte Byrd, who dropped 13 points including his one and only three on the night that proved to be the difference.

This will certainly be a heated battle between two very evenly matched teams. No Limit must find a way to stop or at least slow down Reggie Stewart and this explosive Run TMC offense. Run TMC must mirror what they did in their Week 7 win and shut down No Limit’s perimeter shooting, while limiting and aggravating Vargas’ attempts to drive and score.