Semifinals Preview: No. 1 Brotherhood vs No. 5 ZewCrew 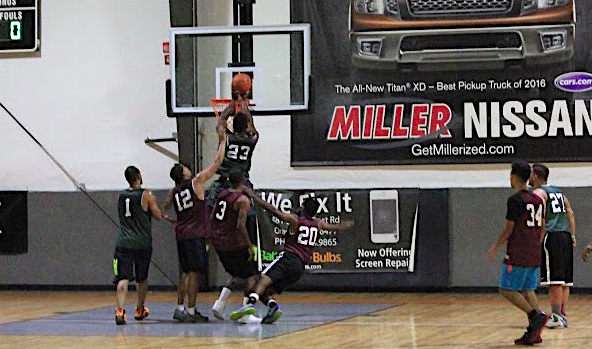 The Brotherhood has breezed through its Legacy Leagues season, winning all 10 games by 13 points or more. However, the Legacy Leagues’ Monstars are about to face a team that may have found its secret stuff.

No. 5-seed ZewCrew is set to square off against the top-seeded Brotherhood at 9pm with a spot in the Legacy Leagues Championship on the line.

The Brotherhood defeated ZewCrew, 78-65, in the lone matchup between the two during the regular season. While the Brotherhood still stood above ZewCrew in the end, the game was a wake-up call for both sides.

The game served as the highest point total for ZewCrew since Week 3, and was also the first time the Brotherhood had been held under 90 points since Week 3.

Since then, both teams have ramped it up a notch.

The Brotherhood won its season-finale against Sportslook, running the No. 3-seed out of the gym as evidenced by the cleanup required by the Sportslook bench. The league’s top team continued its momentum into the quarterfinals of the playoffs, dominating No. 9-seed And-1, 114-46.

ZewCrew followed up the Week 8 loss to the Brotherhood with a crucial upset win in its season finale. Chris Rosario led all scorers with 29 points as ZewCrew defeated Blood, Sweat and Beers, a team that had already secured its No. 2-seed for the playoffs. ZewCrew secured the no. 5-seed with the win, and carried that momentum into the playoffs as it took out the Pandas in the quarterfinals, 62-56.

“I would definitely say we’re playing our best basketball right now as a team,” ZewCrew’s James Davis said. “Everything is clicking. We’re all gelling.”

ZewCrew is about as equipped as any team in the league to stop the Brotherhood. Mark Harrison towers over every opposing player, Chris Rosario is a true point guard that may have a solution for the Brotherhood’s daunting full-court press and Davis plays suffocating defense that may disrupt the Brotherhood’s explosive rhythm.

With all that said, let’s not forget who the Brotherhood is.

At any point, the Brotherhood may have the league MVP, an All-First Team selection and an All-Second Team selection on the court at the same time in Michael Davis, Tyrhon Coward and Russ Payton, respectively. The team has averaged around a steal every two minutes during the regular season, and usually scores more than 100 points per game.

“We just get it in,” Coward said. “We have the MVP of the league. That’s like having LeBron James.”

Time management will be a crucial component to this contest. The Brotherhood has stuck to four-man rotations that swap out midway through each quarter. This has paid dividends for the team as all eight players average more than 6.5 points per game with four players averaging double-digits.

On the other side, ZewCrew will need its best players to play big minutes if they want to upend the Brotherhood. Mark Harrison took himself out of the quarterfinals on a number of occasions, allowing the Pandas’ Chris Dias to dominate down low in his absence. ZewCrew also has the most fouls of any team in the league, so the team will need to stay disciplined to have a chance.

The winner of this semifinal matchup will play the winner of the 3-seed Sportslook and the 2-seed Blood, Sweat and Beers in the finals. The Brotherhood beat both squads by a combined 77 points while ZewCrew went 1-1 against the two.

“We’re more than ready for the second round,” James Davis said. “We’re coming in off a dub. We’re going to see the Brotherhood in the semifinals, baby. Be ready. Let’s go.”