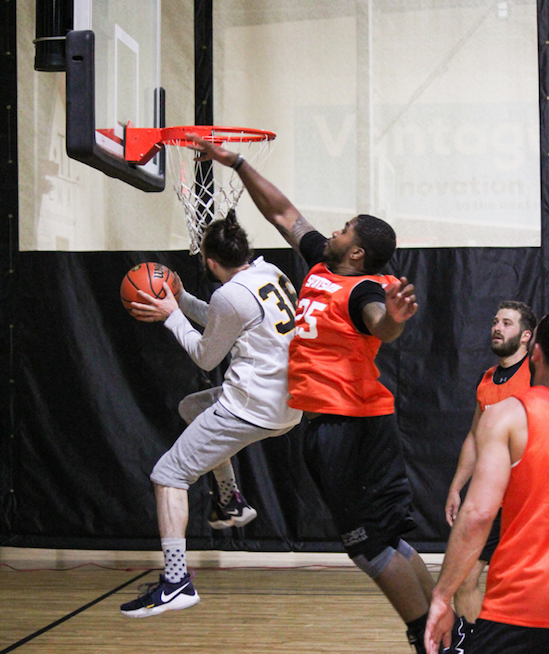 Shocker City kicked off their season against Sportslook Monday night, coming into the season with high expectations. Through one game, those anticipations were met en route to an 84-53 victory. They jumped out to a 13-0 lead early and never looked back from there.

Sportslook came in shorthanded with only four players in tonight’s contest, causing early concern of how much stamina they would have against a fast-paced team in Shocker City. Shocker City took advantage, getting after it on the glass leading to a montage of transition buckets. Shocker City out rebounded Sportslook,46-31.

After the game Chris Rudzinski and Carmine Santorelli said that “defense” was the main thing that led to their transition clinic. Santorelli and Tarell Vargas led the way with 42 points combined and got out on the break and made Sportslook pay for their lack of stamina and poor transition defense.

Shocker City has had several players come together from different teams to create a power house. In Week 1 of the Summer 17 season, Destin Simmons — then playing for the  Bad Boys — scored 42 points on opening night en route to a victory. Monday, Simmons only scored 15 and was Shocker City’s third-leading scorer. Santorelli scored 26 points last summer on opening night for his team Sensual Chocolates. Vargas also had 20 points this time last year for No Limit. These three all led the stat sheet tonight for Shocker City in their route.

Santorelli and Rudzinski also mentioned after the game that teammate Mike Davis was absent tonight and is another massive force. Davis scored 36 on opening night last year for his team The Brotherhood. Combining all four of these forces together has helped create this super team that looks like a force to be reckoned with.

John Zervos led the way for shorthanded Sportslook tonight with 33 points as they hope to get their season back on track next week against the Rim Breakers. Shocker City will look to dominate again and go 2-0 as they face the Young Kings next Monday night.