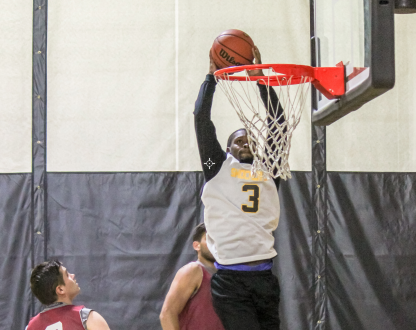 The final scored says it all as Shocker City wins big against Young Kings, 116-71.

The result isn’t much of a surprise since this kind of performance is now expected out of Shocker City, but Myles Raymond of the Young Kings really made a name for himself with tonight’s performance. Raymond dropped 29 points against a Shocker City team whose defensive pressure is unlike any other. In addition, he walked away with a couple of posters to hang on his wall too.

Dontae Abbate tacked on 23 points and Eddie Whitman had 17, but this still wasn’t enough to even slow down Shocker City who scored a Legacy Leagues’ summer season high of 116 points. Carmine Santorelli almost ended up with a triple double and Troy Brunson’s 20 point, 10 rebound double-double was major. However, the real game ball has to go to Nick Santorelli. Nick finished with 14 points, 10 boards, five assist, four steals and two blocks.

“Continue shooting, do what you got to do,” said Destin Simmons.

The team not only caused havoc on the defensive end, but they shot 55 percent from the field and turned the ball over only six times. Shocker City used this game to get themselves going behind the arc as they tossed up 28 three-pointers. A team full of players who can shoot the ball well, and can catch fire at any given time is something to lose sleep over.

Next Monday night, Shocker City look to continue their dominance over the undefeated (2-0) Rim Breakers. Unfortunately the Young Kings will face another difficult match up when they take on (2-0) Team Moose.