Shocker City’s offensive firepower too much for short-staffed Chasers 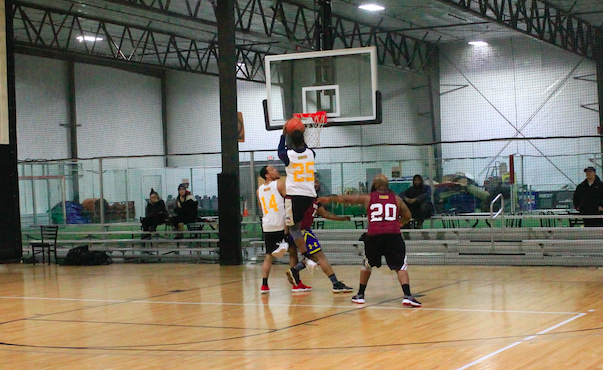 Shocker City picked up another key win Monday night in its title defending season, keeping a perfect record alive with a convincing effort over the The Chasers, 81-67.

Shocker City got off to a fast start, outscoring the Chasers 28-19 in the first quarter. It looked like a typical Shocker City game right from the opening tip. Showcasing quality ball movement, tenacious defense and excellent speed, Shocker City is still the top team in the league sitting at 6-0.

Davon Pratt led the victors again, picking up 24 points. He was aided by Jason Hernandez, who had a big night with 23 points.

“We just worked as a team. We try to do everything together,” Pratt said. “That was the key to victory for us tonight, working hard, you know, what we do.”

The Chasers kept the game fairly tight throughout, led by their leading scorer Dominique Langston, who dropped 22 points. David Armstrong was also a force on defense, collecting 13 rebounds.

But as it is with most of Shocker City’s games, its team depth and speed allowed it to stay strong throughout the whole game and wear down its opponent. This game was no different, as The Chasers only worked with one substitute, which can be tough to do against a fast, deep team like Shocker City.

The defending champions will take on Team Moose next week, while The Chasers will have a tough matchup against another undefeated team in the Flint Tropics.