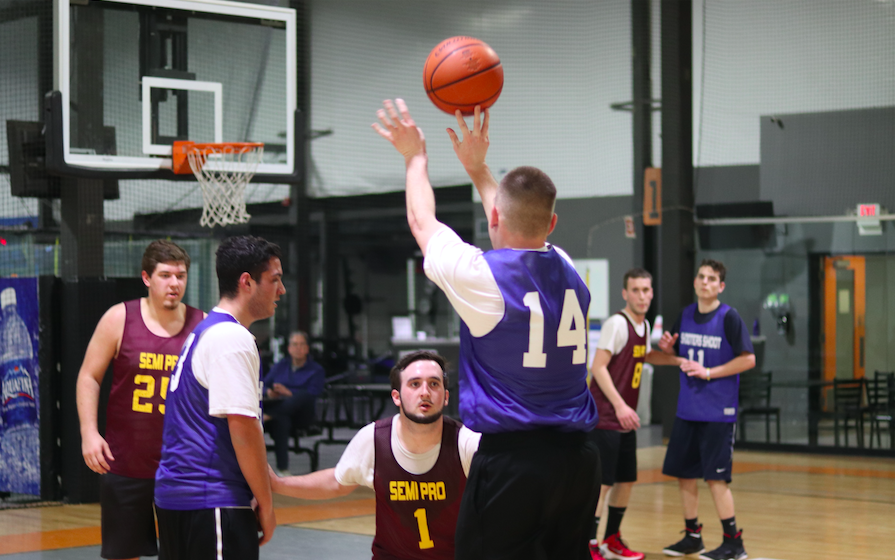 “Feels great, a lot of energy, a lot of fun and we were able to pull off the dub,” Shooters Shoot Brandon Guittard said. In a game where both teams shot less than 30 percent from the field, defense and rebounding was key in determining a winner.

Guittard was the star in this matchup, falling a rebound shy of a double-double with 25 points to compliment his nine boards. He got to the line 15 times and converted on nine of them, which may of been the difference in the final score. Alex DeMeis had 10 points and seven rebounds and Steven Parravano continued to rebound the basketball with 13 and nine points to go along with it.

Outrebounding Semi Pro 46-27 in the contest, there were second-chance points that Shooters Shoot took advantage of. Being aggressive in crashing the boards and going to the basket is what drove them to their first win.

“We got to the line a lot, made them get into foul trouble, that was basically the highlight of the game,” Guittard said.

Semi Pro is still looking for their first win and they are running out of time to get one with one week left in the regular season remaining. They share the basketball well as a team with six players getting on the scoring sheet. Jacob Caselli led the way with 14 points and two rebounds, making half of his three pointers. Jesse Doucette has been the leader on offense throughout the season, and had 12 points and three rebounds Monday night.

Shooters Shoot take on Goon Squad (3-5) next Monday, while Semi Pro looks to get their first win against Stranger Danger (2-5).