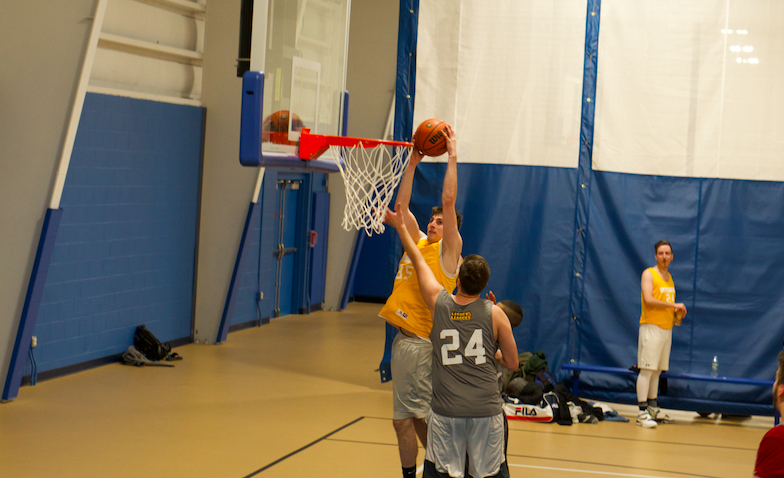 For the Skyhookers, Brendan ODonnell led the way with 16 points on an efficient 7-of-11 shooting. To go along with his 16 points, he also grabbed six rebounds and dished out eight assists. Chase Almond, Zach Charette and Zach Almond each added at least 13 points as well.

This was the first win of the season for the Skyhookers after a single-digit loss to Boom-Shakalaka, 59-51, in Week 1.

“It feels great [to get the win], we definitely feel like we let one slip away last week,” Zach Charette said.

In the win, the Skyhookers dominated the Alaskan Bull Worms on the glass, with a 17 rebound advantage as a team. This was mostly due to the height advantage the Skyhookers had with Zach and Chase Almond both getting double-digit rebounds with 11 apiece.

The Skyhookers also shot a lot better than the Alaskan Bull Worms, while also turned the ball over less. The Skyhookers shot 44.6 percent from the floor compared to their opponents 33.9 percent, and had an 11 fewer turnovers.

Sean Botelho was the leading scorer on the night for the Alaskan Bull Worms with 18 points and seven rebounds. Brandon Arruda and Aaron Morrell were the other two players in double-digits for the team with 13 and 11 points, respectively. To go along with his 11 points, Morrell had 10 rebounds for the Alaskan Bull Worms’ lone double-double on the night.

The Alaskan Bull Worms will need to keep the turnovers down if they want to stay above .500 next week, where they face the winless Boston Blazers. On the other hand, the Skyhookers are looking to improve to 2-1 on the season with a matchup against the Pizza Rolls before the holiday break.