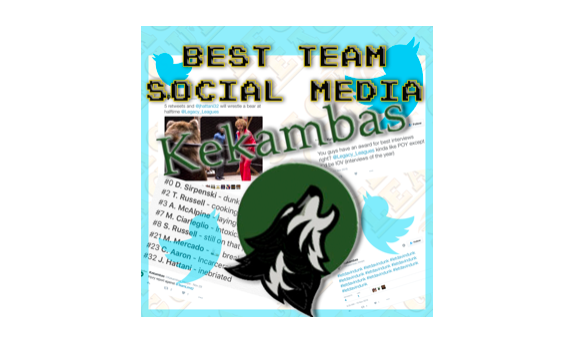 With the offseason dragging on and the holiday season upon us, it feels appropriate to take some time to reflect on all of the great things in life, such as Connecticut’s premiere low-rim basketball league, the Legacy Leagues. Another season is in the books, and a familiar team sits atop the throne after completing their second straight undefeated season.

While the high-flying brand of basketball this league provides is unique and sets this league apart from others, this fall season really proved how an immersive social media experience elevates the Legacy Leagues in an entirely different and equally as entertaining manner.

But seriously, thanks to all 10 teams who had Twitter this season!! Y’all made the league that much more fun. Looking forward to #Winter17

The Fall 2016 season provided a modern-day spark when Twitter transformed the league into an immersive experience that carried over all of the intensity and trash talk from Tuesday nights to the rest of the week. As the season began to gain traction and teams familiarized themselves with one another, we slowly saw individual teams joining Twitter and adding to the off-court experience.

To acknowledge the impact this has had on legitimizing the league and elevating the competition, we felt it was necessary to honor the team who provided the best social media presence. The decision was a difficult one, but at the end of the day we named The Kekambas winners of the Best Team Social Media award, a prestigious honor that should be cherished and celebrated.

The Kekambas (who have since changed their name to the Renegades) showed just how fun this league can be. Aside from everything that goes on on the court, we were reminded how critical trash talk truly is to great competition. While their record on the court wasn’t the best, their consistency off the court on Twitter was unparalleled. Let’s take a minute to reflect on some of the notable Kekambas tweets from this season.

They were even thoughtful enough to provide injury reports for each game!

This kind of performance can’t go under appreciated so we at Legacy Leagues wanted to say just how much we love the continued interaction through social media that keeps the league fresh. Not only did social media enhance the way teams communicated, it opened up a whole new niche market of sports betting.

In addition to championship odds, Sportslook, in collaboration with Vegas, gave us lines and spreads for every match up this season. The key to being a good sports bettor is being well informed and having deep pockets. If you want to make money on these spreads be sure to keep up to date on Legacy Leagues highlights through our highlights page.

One of the things we love about Twitter is that it gives teams a safe space to vent about their frustrations about the league. Complaining about officiating is a given in sports, but complaining about it on Twitter as opposed to the court could save you a technical foul, a lesson John Rullan of No Limit learned the hard way.

No Limit’s sharpshooter John Rullan is facing a one game suspension tied for most techs in a game .. Tied with Artest & Rasheed Wallace

Social media has proven to be an effective tool for trash talk, but it has also provided a useful portal for teams and league officials to communicate about issues and concerns for the league. Like anything in life, constant change and improvement is necessary. The league prides itself on being flexible and being available to listen to any and all grievances about the league because at the end of the day our goal is to provide the best overall experience possible. We urge players with any questions, concerns or suggestions to not hesitate to reach out to us on Facebook, Twitter or email at thelegacyleagues@gmail.com.

We hope to see you all back for the Winter ’17 season as this league only continues to grow and get better. We could not have done it without an active and enthusiastic contribution from all teams and players.

And remember, the easiest way to get what you want is to offer donuts.