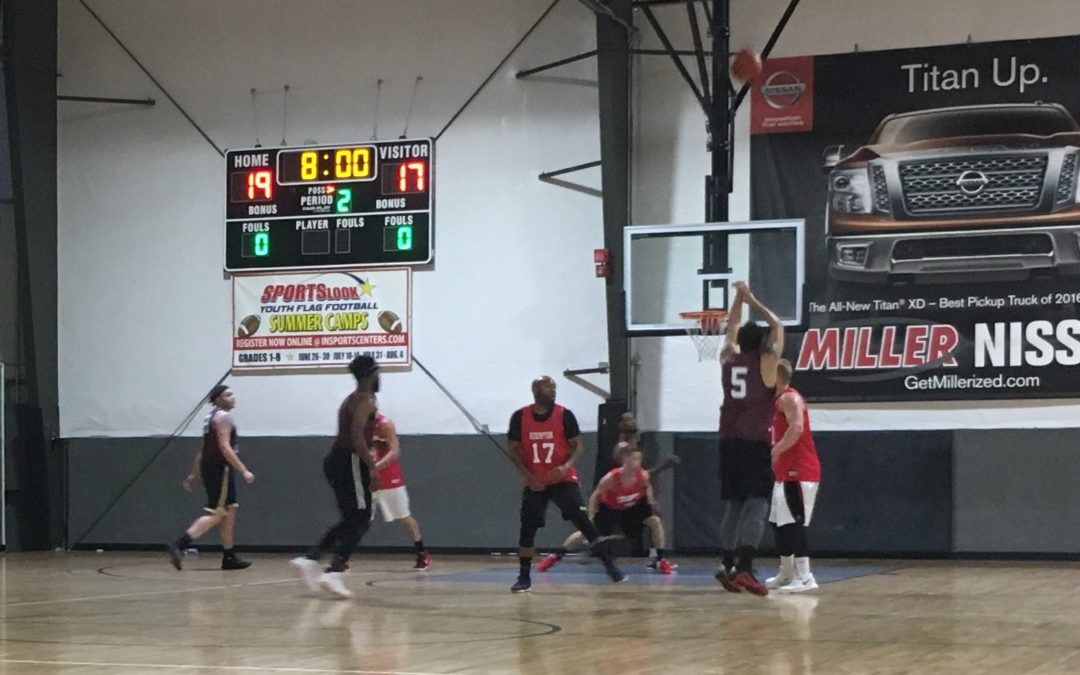 After much clamor (specifically from my fellow fresh-haired friend Davin Sirpenski) this will be the first, bi-weekly, hot takes article for Legacy Leagues. My wisdom of all things Legacy Leagues will be on full display for the Summer 17 season with these articles and a bi-weekly Instagram Live show, where I will take your questions regarding my takes and anything involving Legacy Leagues in general.

There is a clear class of the league

Despite only two weeks having gone by this season, it has become increasingly clear that a select few teams are head and shoulders above the rest.  The Brotherhood, No Limit, and the defending-champion Monstars seem to be in a class of their own.

First, The Brotherhood have still not lost a single game in the Legacy Leagues, winning back-to-back titles on undefeated seasons in Summer 16 and Fall 16.  Now, after skipping the Winter 17 season, they are back and back in full force. They boast, possibly, the two best players in the league in former MVP Mike Davis and former Offensive Player of the Year Russ Payton.Their vaunted pressure defense has been in full force thus far, forcing 20 steals and getting out in transition scoring the second-most points in the league to date. After turning it on late in Week 1 against Sensual Chocolate without Payton, they look to be in midseason form following a win over last season’s runners-up in Redemption. Another undefeated season and third title could be in the future. 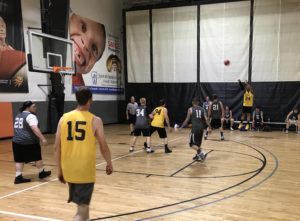 Ronte Byrd pulls up from downtown in No Limit’s Week 2 win over Sometimes Y, 117-62

Second, No Limit. After losing John Rullan to their top-rivial Run TMC, No Limit has rebounded astoundingly well with de-facto General Manager Ronte Byrd adding Jalen Graham (Winter 17 MVP), Ty Sands, Rashawn Hendricks, and Davin Sirpenski. New faces in Sands and Hendricks add athleticism, defensive pressure, and more offensive firepower, while Sirpenski adds a rim protector and mental toughness off the bench. Already their defense has improved vastly, as they have the most steals in the league with 29. This allows sharpshooter and rim rattler Howie Miller to play free offensively, along with Tarell Vargas attacking the paint. They have socred the most points in the league with 209 through two games. With a loaded roster, there may be no limit (pun intended) to their expectations this season.

Third, the Monstars, after winning the Winter 17 title led by Reggie Stewart, Mike Cody, and Corey Jacobs, have come out firing again this season. Despite, not really taking their competition too seriously through the first two weeks, the Monstars have a 20-point average margin of victory. Stewart is back with plenty of help, as captain Ty Alston added Mike Cody’s brother, Brett, skilled big men Greg Langston and Kintwon Miles, and solid bench scorer Larry Little. The Monstars once again may have the most athletic and confident team in the league. If that confidence can keep churning out wins, they may have great chance at defending their title this season.

Steve Echols will be a true point guard 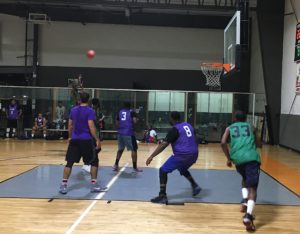 Steve Echols attempts a three in Stranger Danger’s Week 2 loss to The Throne, 63-62

After a season of having to carrying the load in scoring in Winter 17 for Stranger Danger, Steve Echols finally has some pieces that will allow him to become a true point guard this season. With the additions of Zacarri Graham, who has scored

over 20 points in his first two games this season, and Melquan Horton, Echols will take on less of a scoring role and more of a distributing role than last season.

Through the first two games, Echols has averaged six assists, in comparison to only averaging three last season. With Graham being able to score on the interior and in transition with greater athleticism and ease, Echols can head the attack looking to score and distribute. This will also allow Stranger Danger to run a more efficient offense, with less turnovers from Echols and the team in general.

Despite losing a heartbreaking game to The Throne this previous week, Stranger Danger is much improved thanks to their increase and depth and role shift. Don’t be surprised if they upset another high-seeded team in the playoffs, like they did the previous season when they slain the dragon in the fourth-seeded Temptations.

A championship will Stay elusive for Carmine Santorelli

After losing the first round last season in upset fashion to Stranger Danger, Carmine Santorelli’s Temptations team was cut down and he joined forces with Tyhron Coward of the Cereal Killers to form Sensual Chocolate. Santorelli, the Winter 17 Offensive Player of the Year, has long been known as a wonderful talent that can score, pass, and rebound, but still hasn’t even sniffed the Legacy Leagues Championship trophy.

This season, he joins forces with Coward, slashing-athlete Aaron Samuel, and brings along his brother Nick Santorelli, big-man Troy Brunson, and sharper-shooter Bryan Pratt. Carmine Santorelli loses a bit of floor spacing this summer, with only Pratt and Coward lethal from the outside. Brunson allows for the option of a pick-and-roll, but like most of the supporting cast, is a one-dimensional player. The one-dimension nature of Carmine Santorelli’s supporting cast has reared its ugly head thus far, as Sensual Chocolate has fallen to 0-2, with a heart-breaking loss to The Brotherhood, and a blowout loss to the Flint Tropics.

Even if Carmine Santorelli has another spectacular season, it will be hard for him to carry the load to a championship if he has to get through even two of the big three in The Brotherhood, No Limit, or the Monstars.