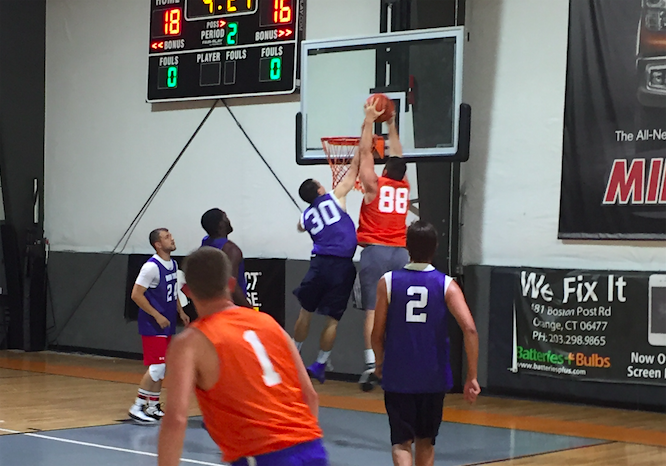 Sportslook outscored Run TMC in each quarter Tuesday night on their way to a 77-65 victory in week 2 of the fall season.

Sportslook’s Nick Bacarella is the embodiment of a player-coach. He defines Sportslook on the court — experienced, savvy, and a penchant for fleeting moments of brilliance. With seven points, five rebounds, and three assists on the night, he may not be a stat-stuffer, but do not get it twisted: he is the spark plug to the Sportslook engine.

Bacarella’s teammate, Bryan Acevedo, the league’s leading scorer, poured in a quiet 26 points in the comfortable win. If you can put in 26 points quietly, that says something about your scoring prowess.

What Sportslook’s Scott Crochard lacks in size is made up for with his big game. In his previous outing, he only scored 10 points, but showed flashes. Against Run TMC he had 18 points, five rebounds, and three assists, and controlled most of the ball-handling duties for Sportslook.

“Being able to have Scotty run the point and control the ball really helps us,”  Sportslook’s Andrew Cavanagh said. “[Going forward], conditioning is the first thing that comes to mind. All of us wanted to improve in that area.”

Nic Civale was a bright spot for Run TMC in his first game of the fall season, hitting 4-for-7 from beyond-the-arc on his way to 18 points.

Up next, Sportslook ‘looks’ to continue their dominance against the Cereal Killers (2-0) in an anticipated matchup of week 3. Run TMC hopes to get their first win against The Brotherhood (2-0) at 10pm next week.